This month I began opening a series of boxes of old family papers and making an inventory of what my cousin Janet has passed to me. Among the papers I've found many handwritten by my grandfather's sister, my great aunt Mary Eliot Nichols, known to us as "Aunt May."   I remember her fondly.

I'm especially pleased by some photographs of Aunt May and a 1959 Danvers Herald article about her long teaching career in Danvers. 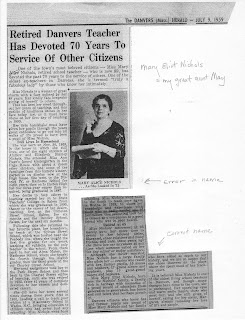 The old newsprint is by now darkened and crumbling from the acid in its pulp paper, too fragile to last much longer. I have made a copy onto less acidic paper, and scanned it to post here. In the process I have added notes to correct an error in the printing of her name.

I've found a copy of the original 1932 photograph that was reproduced in the paper; see below. 1932 is the year she retired from teaching, and the year she bought a Ford car we later called "Oswald."  [Type "Oswald" in this blog's search box, upper left, to find my previous postings about that car.]


The next photo of Aunt May is labeled (in pencil on the back) "Park St."  Thanks to the article summarizing her career, I know the significance of "Park St."  She taught at the Park Street School after many years at other schools. Thus the date must be in the 1920's.


Next I am posting an example of Aunt May's writing about her school years. This is an unfinished draft, undated.  She began,  "As I look from the window today I do not see what I saw in looking from it when I was four years old, then I saw a school house, which became for me well-known during the next nine years ..."  That would be the one-room Hathorne School on the Newburyport turnpike just south of her home. I attended that same one-room school (see my April 2007 column about first grade).   Here is a scanned copy of Aunt May's draft; click on each image to enlarge. 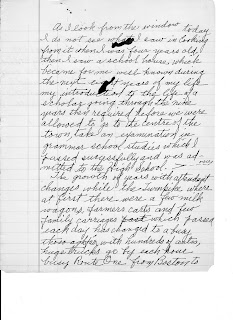 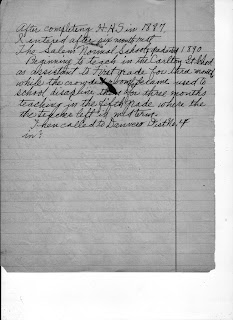 For my July column, I've written "Remembering Aunt May."  It was published in the Danvers Herald July 25 and posted online July 27.
Posted by Sandy at 6:13 PM No comments: 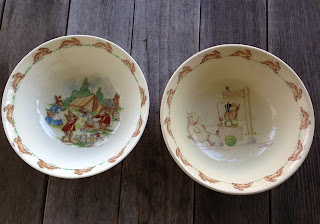 I'm looking forward to a visit by my grandsons. I'm cleaning house and setting out special items they might enjoy. This morning I remembered the old "Bunnykins" bowls my sister and I had loved.  Only a few remain; I found them in a hidden corner of a cabinet, where they've been sitting unused for years. What fun to see them again!

As you can see, one bowl is very worn. I remember that one especially and am sure we used it daily for years.
The other bowl, a camping scene, looks newer and does not evoke strong childhood memories. It must have been acquired later, or was less popular with us.  I expect that my grandsons may like that one best. 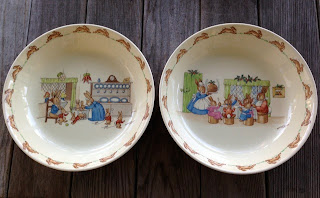 We also had some wider, shallower bowls; I still have two of those, pictured here.

Does anyone else remember these bowls?

Above are close-ups of bunnykin scenes I recall so fondly.