Happy Halloween!
I hope Hurricane Sandy (no relation to me) didn't scare you, wreck your neighborhood, or leave you without power for very long.  Here in western Massachusetts the storm brought wind and rain, but not much damage. Our home lost power for only about an hour on Monday afternoon. Nevertheless, to be safe, our Mayor recommended that Halloween trick-or-treating be postponed until Saturday.
This evening I will be participating in the Rag Shag Parade, a Halloween tradition in a neighboring community.  I play percussion in The Expandable Brass Band, and will wear one of my recent Halloween costumes.
As a kid in Danvers I sometimes had trouble thinking up costumes ideas, and I was quite shy about dressing up or acting out.  Now in retirement I'm having a wonderful time prancing about costumes and marching in the street with this lively band of 15-20 musicians.  Fun!

Recently a friend asked me for one of the Halloween stories I'd written about my father.  Hmm...  how to find it... that was a few years back (and linked in this blog). Aha!  I realized that I ought to have a SEARCH BOX on this blog. So this morning I figured out how to add one.  Try it!  Search for Halloween.  You'll find the stories I wrote in 2007 and 2008.  Have fun!

Today I finished writing my next Remembering Danvers column, which will be published in November.  In it I describe, among other things, a family funeral I attended.

Coincidently, today (October 30) is designated as "Create a Great Funeral Day."  This event was created by Stephanie West Allen in 2000:


"The Day was founded with the hopes of getting loved ones to sit down together and talk about what they would want at their funeral so their loved ones know when the time comes and do not have to juggle their grief with trying to plan a funeral and guess what they would have wanted, even if it is just so much as a particular song played at the funeral, or words for the headstone."

My great aunt had known what she wanted and had written down her instructions for the family to follow. A good idea. I remember being impressed at the time (1966) that she had planned ahead. I don't know how many years ahead, but I'm glad she did it while she could still communicate. She lived to the ripe old age of 96 years.

More information about Create a Great Funeral Day has been posted by Gail Rubin, author of A Good Goodbye: Funeral Planning for Those Who Don't Plan to Die, on her Family Plot blog.

Recently I enjoyed showing an out-of town guest around. She had never experienced a New England fall and was excited to be here in October.  On a beautiful sunny afternoon we strolled beneath brilliant trees in a local cemetery and marveled at the colors. 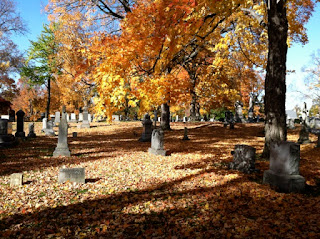 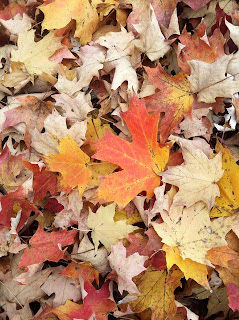 Looking down, I noticed leaves of varying colors and instantly thought of the multicolored leaves from maple trees by the old barn in Danvers. I was transported back to childhood and the happy time spent collecting those uniquely-colored varieties.

Today I saw men loading a dump truck with raked-up leaves. One man jumped up and down on the pile in the truck while two others lifted piles of leaves to add to those in the truck.  I smiled at them as I bicycled by. The man on the truck grinned as he called out, "You want to come and play, too?" I was tempted, but instead just laughed and rang the bell on my handlebars. These piles of bright leaves bring us back to the simple joys of childhood!

Tuffy at the Fair

My recent column on Childhood memories of the Topsfield Fair included a description of the Mutt race that was almost won by Tuffy.

Tuffy, a loveable mixture of French Poodle and German Shepherd, belonged to my cousin Janet Nichols Derouin and her family. They lived next door to us in Granddaddy's house. Tuffy was a good companion to the young Derouin boys, Chad and Monty.

The Derouins entered Tuffy into the Mutt Derby at the Topsfield Fair.  He had long legs and ran well, easily outpacing most of the other dogs.  He was likely to be the winner, Janet says, but another dog attacked him from the rear, nipping Tuffy's back legs repeatedly. To escape this problem, Tuffy jumped over the inner fence and ran across the center of the race ring. The crowd went wild cheering for Tuffy, but Tuffy was of course disqualified from that race. I clearly remember the crowd cheering as Tuffy jumped the fence and crossed the middle section, but I hadn't seen the attack on Tuffy's legs, so I thought he was just taking a clever shortcut to reach the mechanical rabbit. Not so, says my cousin. Tuffy was simply escaping a dog fight.  Anyway, the crowd loved the excitement of the Mutt Derby.

Dog fights and unpredictable behavior were common at the Mutt Derby. I just found (via Google Books) a 1953 Life magazine article, "Life goes to a Mutt Derby":


At the Annual Mutt Derby, part of the Topsfield fair, 34 mongrels gathered on the track where greyhounds ran weekday nights. ...

Look at the photos!  Life magazine October 5, 1953, page 156.   Tuffy wasn't there that year, but you'll get a good idea of the scene and the chaos that can ensue when family pets are entered in a race.
Posted by Sandy at 9:50 AM No comments:

I've written this month about the Topsfield Fair. My family often attended the fair, and I have many good memories of experiences there. The 2012 Topsfield Fair runs 'til October 8 -- if you are nearby, go!

My cousin Janet Nichols Derouin called Monday to talk about the fair. She was responding to a draft of the column that I had emailed her.  We laughed together recalling the antics of her dog, Tuffy, who had almost won the Mutt Race one year. I think Tuffy deserves to be the subject of a future column. Tuffy and the Derouins lived in Granddaddy's house next door to us for some years in the 1950's before they bought a home on Durkee Circle.

Janet surprised me with a bit of family history. Did I know that one of our ancestors helped to start that fair?  Dr. Andrew Nichols, father of the Andrew Nichols who built Pine Knoll in 1861, was one of about six men who worked together on a committee at the beginning of the Topsfield Fair!  I hadn't heard that story before. (There are seven generations of Andrew Nichols -- a long tradition of naming the first son Andrew-- so sorting out which Andrew did what can be quite a challenge as we look back on history.)

Today I looked at the history page on the Fair's website.  It begins, "The colorful and often exciting history of Topsfield Fair began in 1818 when the Essex Agricultural Society, the non-profit organization that owns the Topsfield Fair, was officially granted a charter on June 12th of that year. The goal of the fledgling Society, formed by a group of "practical farmers" who first met on February 16, 1818, was "to promote and improve the agricultural interests of farmers and others in Essex County."

Reading further, I learned that the Topsfield Fair didn't settle into its present location until 1910. "What began as the Essex Agricultural Society Cattle Show with its annual exhibits/fairs held in various sites around Essex County to showcase agriculture, Topsfield Fair has been held annually at its existing location since 1910. It is fitting that the fair eventually settled in Topsfield, for it was at the town's former Cyrus Cummings Tavern that twenty or more men first gathered that February in 1818 to form what soon became the Essex Agricultural Society."

Was my ancestor at that Tavern in 1818?  Not according to the list of names in "An Act to incorporate the Essex Agricultural Society" found via the state archives website today. [I see two other Nichols listed, Ichabod and Benjamin, but I've never heard of those names in our family tree.]  I don't have much time today to investigate further. A quick search via Google confirms that Andrew Nichols (1785-1853) did give advice in the area in that time period.  His 1819 remarks about temperance were published in a 28-page pamphlet now owned by several libraries:

As a child I did hear elders say that I came from a long line of teetotalers. I can imagine that Dr. Nichols, a medical doctor, may have lobbied to keep alcohol out of the agricultural shows.  Or, he may have participated in other aspects of the Essex Agricultural Society...   That thought led me to a second Google search for the history of the Society.  Its Transactions are online and searchable!  The name Andrew Nichols appears repeatedly: on a committee examining tree plantations..., winner of a premium of $10..., elected Treasurer in October 1829,  on committee related to examining animals competing for premiums in 1830. There is mention of "...cattle owned by Dr. Nichols of Danvers..." Clearly he was involved on many levels.

Perhaps some reader of this blog will be able to tell more about the history of the Topsfield Fair or about roles Andrew Nichols played. [Comments can be added to my blog entries at any time;  I'll receive notification by email. Comments are public for all to see. If you prefer to contact me privately, send email via the contact form on this blog. Thanks!]