This old box brings back many memories... 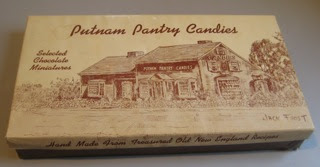 I'm glad Putnam Pantry Candies continues as an operating store (see www.putnampantry.com). I enjoyed some treats there in May 2008 and look forward to future visits.

I recall a time when Putnam Pantry had stores on BOTH sides of Route 1. And long before that, I remember an amusing story (newspaper article?) about the effect of the new cloverleaf system on Mr. Putnam's "commute" to and from work. If instead of walking to the next-door building he chose to move his car, he had a very short drive TO work, but in the evening would have to drive north on Rte 1, then take each cloverleaf in turn until he had made 4 loops back to his house! My father liked to retell that story. I witnessed the cloverleaf construction from my 1st grade classroom in Hathorne School which, like Putnam Pantry Candies, became encircled by one of the loops. I wrote about that experience in one of my first columns for the Danvers Herald (see April 2007 column).

This month I wrote about Sweet Choices; my column was published with the title, "Sweet choices carefully considered in Danvers."  Here's what I wrote:

"Hurry up!" my sister exclaimed impatiently, while I stood at the ice cream counter, studying the long list of flavors.  This was serious business --to pick the best one-- and I didn't like to be rushed. Vanilla was my usual favorite; chocolate chip was also very, very good.  But I liked to consider all the options before deciding. My family teased me about being predictable; they KNEW I would only order vanilla or chocolate chip. Perhaps that's why I tried so hard to find an alternative, to surprise them.  In the end, though, I rarely dared to risk a whole ice cream cone on an untried flavor.  "Chocolate chip, please!" I'd say at last, as my sister and parents gave each other knowing looks.

I wonder if my caution in selecting ice cream flavors came from early experiences with flavors I disliked. Coffee, for instance. My mother loved coffee ice cream; I thought the taste was awful. An even earlier memory involves maple walnut ice cream, one of my father's favorites. They didn't tell me anything about what was in the ice cream. I was very young, and reacted in horror as I encountered the nuts. "It has bones in it!", I said loudly as I rejected the offending stuff.

I became more adventuresome in my adult life, even ordering a wasabi-flavored ice cream cone once (only once!). I'll try almost anything now, no longer afraid to "waste" the money, which was a concern in my Danvers days. My parents, who had experienced the Depression, were conscientious "penny-pinchers" who rarely ate out. Thus, going out for ice cream was a special treat, and I learned to be careful.  I wanted to make a good selection, "worth" the money.

I grew up not far from Putnam Pantry Candies. You can imagine the sweet choices there! I'd follow my mother around the store, gazing in amazement and hardly daring to hope that we'd buy the candies that caught my eye. If given money to spend, I'd be overwhelmed by the choices:  chocolates of all shapes and sizes, fudge light and dark, sticks of hard candy in a wide assortment of stripes and flavors, maple sugar candy, lollipops, and mints of assorted pastel colors. Mommy especially liked those smooth round mint pieces and sometimes bought a box to take home and savor one at a time, as her special treat.

One day we watched the creation of those mints in the basement of Putnam Pantry. We climbed down the narrow stairway and peered through big glass windows as candy was prepared. Someone dressed in a big apron squeezed a conical bag, dropping gobs of a gooey substance onto a huge flat surface that was gleamingly clean. Each little gob flattened out and solidified. My mother said the surface was refrigerated, so the candy hardened quickly. Fun to watch! Last year I returned to Putnam Pantry Candies, delighted that they were still in business, still with an observation area in the basement, but I was disappointed that they no longer carry the mints or the fruit-like semi-circles my mother and I had so enjoyed. I did buy some horehound candy, another nostalgic treat. I noticed the ice cream smorgasbord; I don't think it existed in the 1950's.  (I probably would have been too overwhelmed by the choices to enjoy it!)

My father avoided the mints. His mother had given peppermint to cover the taste of caster oil medicine, so mint reminded him of the dreaded caster oil – spoiling that choice. I enjoyed Daddy's story and enjoyed Mommy's mints, when she would share them with me. Too often she quoted our dentist about not feeding candies to children. Sweets in our home were carefully rationed.

Marshmallows, for instance, were counted. We could have two, or at most, three. A consequence of this rationing was that a bag of marshmallows lasted a long time. Most of the marshmallows hardened somewhat before we ate them – excellent for toasting. A firm marshmallow stays on the stick and toasts up nicely, especially if you have the patience of my mother. She could always toast one to perfection, all golden brown and puffy. Yum!

It is fun to remember the sweet treats of my childhood, made all the more special by the rationing and careful selection.

This month's column is about a cousin who used to fly over Danvers in the early days of aviation. See the online version, Viewpoint: Way Up John. 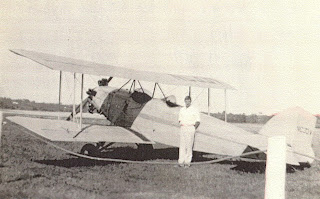 Cousin Stuart recalls, "Seeing or hearing an airplane was a big deal in those days. Many planes followed above the Newburyport Turnpike since it was a straight line reference point. Everytime a plane would fly over, we would rush out to see it. And sometimes it was "Way Up," who would circle the house a number of times. What a thrill."

John's daughter provided a copy of this photo taken by cousin David Brewster, captioned "John B. Nichols with his Kittyhawk Biplane (Way-up-John) / Portsmouth, NH 1935"
Posted by Sandy at 10:07 AM No comments: