A few days ago I visited my Aunt in Connecticut. She showed me a box of old letters to and from my mother (her sister). I pulled out one at random, and read with interest my mother's words, dated June 11, 1957:

"Our new house is progressing and this is the rapid stage when you get more for your money, so to speak. They are trying to get the roof on this week while the weather is good so that they can work during any rainy periods. Every evening we all go to inspect the progress. Last evening we saw a large raccoon coming down from a giant tulip tree. That tree will bear watching. I shouldn't be surprised if there were a coon family sheltered in its innards, somewhere. And last weekend, a baby owl fell out [of] a tree on to the road and there was much excitement trying to decide what to do with it. We ended up putting back where it fell in the hopes that the parent owls would look after it. You have to have a permit to keep a songbird or owl in Mass. But it was a sweet little bundle of feathers with tiny horns -- a baby screech owl, we think."

I don't recall seeing that baby owl. I do recall much about the raccoon raised that summer. And yes, we needed a permit to keep a raccoon. I've written more about this coon for my July column:
Adventures with Danny the Raccoon.
Posted by Sandy at 10:17 AM No comments:

One summer many years ago, when I was barely a teenager, I found a baby raccoon, and brought it home to raise. I have just written the story of how I found the baby, and what happened in the first hours and days. [The story was published June 3rd in the print edition, and posted online 6-16-110, with title Rescued raccoon becomes a companion.]

In future months I will write more about Daniel Coon, or Danny, as I called him.

He was very cute, like a little kitten, but with soft hands and no claws. He moved his hands constantly, feeling and playing with everything. He would sit in my mother's lap and feel the wedding ring on her finger, and rotate it around her finger, around and around! We all became very fond of Danny. 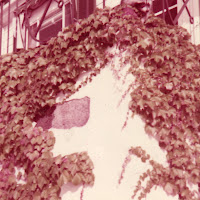 I've just searched for a photo of Danny, and found only this very poor one.  It was taken in Marblehead, MA, while we were visiting Mr. and Mrs. Al Gardiner; Danny climbed on their patio wall.


Danny is hardly visible on the upper right edge of the small snapshot -- hardly worth reproducing here. The caption on the back, however, is helpful. "Daniel Coon ('Danny') ... Summer '57 Found at Locust Lawn on June 30, 1957. Taken with me to Wildwood; Delhi, N.Y., and Annijay's. Taken to ..."
Ah, but that is getting ahead of the story. Stay tuned for further adventures with Danny!
Posted by Sandy at 10:27 PM No comments: