Much has changed in Danvers since my youth. During my recent visit, I observed and photographed many scenes that brought back memories. I noted transformations -- some for the good, some not. The old Maple Street School, where I attended 2nd grade, looks in fine shape, though it now provides housing rather than classrooms. 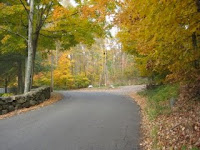 This curve of Nichols Street --once so familiar, right in front of my old home-- is now called Conifer Hill Drive. The stonewalls have been nicely rebuilt and the street re-paved. Years ago a modern office park replaced my childhood home and garden, my grandparents' house next door, and the garage in which my father's business started. 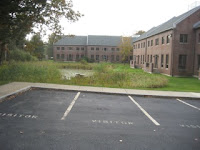 Today I can park in Visitor's spaces exactly where my childhood house once stood and look at what remains of the pond. I'm glad they saved a portion of that old pond, which was called "Willow Pond" in the children's book Going on Nine (see sketches on the endpapers). For a 1941 photo of the pond and our house, see my April 2008 column High Water in Spring. 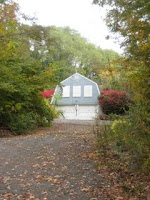 I walked across the street and examined the woods, now overgrown with tangled vines and many trees new since my day. Slightly up the hill I could see the garage my father built in the 1960's; our big colonial-style house, built in 1957, has already been torn down. Why?, I wonder. What will be the next transformation for this property? The old barns and Locust Lawn ski trails were destroyed as Route 95 cut into the east side of the hill. During the summer of 1971, my 2-year-old son loved watching the earth-moving equipment, while my mother mourned the loss of the trees and trails. My young family moved to California in August 1971. My mother died in 1976. My father later remarried and moved to Marblehead, selling this homesite to a construction company, so we knew that changes were likely. The house did remain intact, though, for years and was again a residence for a while, I believe. 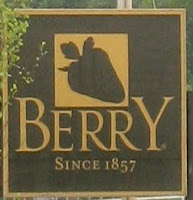 A surprise greeted me at the entrance to what used to be my father's business (UNEX Laboratories/Nichols & Clark, Inc. on Rte 1). A small sign led me to Henry's Conifer Café in the Berry building. I enjoyed a tasty lunch and talked with people there. It's a very pleasant place, though completely transformed from what I remember. No trace at all of my father's hearing aid factory!

Further north, I explored Ferncroft Road and the entirely new (to me) campus of North Shore Community College. Just beyond it is the old Ice Pond, where I used to skate. (See Skating Backwards, my first Danvers Herald column, March 2007.) What a joy to discover the Ferncroft Pond Conservation Area! 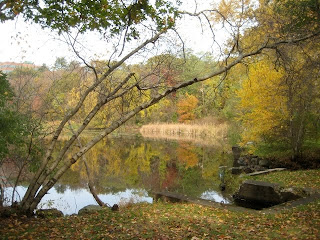 I sat at the table overlooking the pond, then studied the map and spent the next hour or so hiking the trails and enjoying the beautiful woodlands and wetlands. The concrete foundation where I used to sit to put on my skates is still intact! Today, while preparing to write this blog entry, I searched for information about the Ferncroft Pond Conservation Area, and found an informative article in the Danvers Herald: Hiking and bird watching at Ferncroft, by Bella Travaglini (Aug 31, 2005).

Another delightful discovery during my Danvers visit was the College Pond Conservation Area. This was an accidental find. 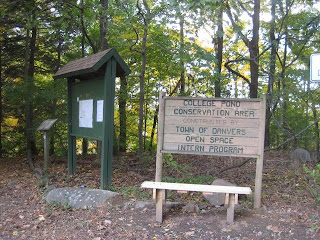 I had driven up Spring Street to St. John's Prep and then turned south on Summer Street, when I decided to turn around. Looking for a safe place to turn, I entered Greenleaf Drive. I didn't remember this street, so I decided to explore it. Not only did I find a handy turnaround space, but signage announcing a Conservation Area. 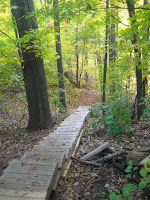 I parked my car, strolled into the woods, and followed the pathway downhill, down a wooden stairway through the trees. This hillside was not at all familiar to me, nor could I recall a pond in this area, so I was quite curious to see where the path might lead. 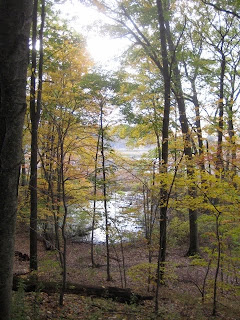 Gradually I caught glimpses of the huge wetlands area below and guessed that this might be the large pond where my parents used to skate. We used to approach it from the opposite side, near the old railroad bed. I had never realized it could be reached from St. John's. 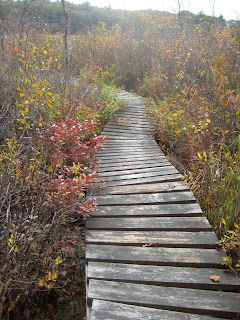 The boardwalk out toward the open water is creatively constructed; the curves invite you to slow down and look at the world around. Up ahead, I heard a splash. A turtle, perhaps, or a frog, had jumped into the water as I approached. I only saw ripples spreading out on the water surface. 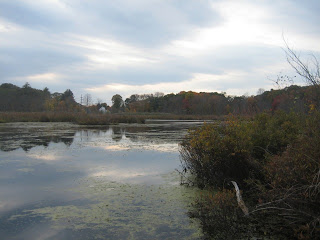 I sat at the end of the boardwalk watching the water and the sky, listening to the active bird life all around me ...ducks flying overhead, sparrows in the bushes beside me, red-winged blackbirds calling in the marsh across the way. I waited patiently until I saw something swim just under the surface and recognized the head of a turtle coming up for air. He saw me, and quickly disappeared under the water. A second turtle swam nearby.

I feel SO THANKFUL that Danvers has set aside these natural areas in which birds and turtles can thrive and I can regain a sense of balance and connection to the natural world. The hours spent in these conservation areas rekindled my childhood sense of wonder, and relaxed my body. Everything slowed down, and I felt refreshed and renewed, a wonderful transformation. Much has changed in Danvers, but some very important things have been preserved.
Posted by Sandy at 3:54 PM 1 comment:

My column for this month reflects on the transformations seen and experienced at Danvers Middle School: "Transformations great at old Danvers schools".

Photographs of the Richmond, Holton, and new Middle School architecture can be seen in my online album:
Preserving Old With New.

I thank Principal Michael Cali for taking me on an informative tour and answering my many questions about the project. My specific reason for requesting the tour was to learn about this example of combining new and old architecture. I hope that this example will help inspire preservation during renovation/expansion of an historic library building in my current community.
Posted by Sandy at 9:27 PM 2 comments: