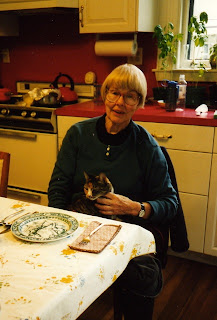 This week I am gathering photographs of my aunt Elizabeth Barlow Cutler-Wotton, who died recently at age 91. She was my mother's younger sister. In childhood I called her "Aunt Betty" and in later years she preferred to go by Barlow.

This photo of Barlow was taken in October 1997 when she was 76. She was visiting our home in western Massachusetts and holding our cat Sevda.


The decorative plate in front of her is an old family heirloom, part of a set of Wedgewood dishes that my mother had inherited long ago from "Aunt Harriet."

I never met Aunt Harriet, nor did I have a clear idea about her exact relationship to our family, but her name became familiar over the years in connection with various treasures. I learned that she traveled widely and brought home unique items. My favorites include an embroidered Russian peasant shirt (which I once wore in a dance performance) and an unusual necklace with amber beads (which I still wear on occasion). I also associate her with these Wedgwood plates of "Ivanhoe" design. We read Ivanhoe in the Danvers schools and could recognize the names of the characters on the china: Lady Rowena, Friar Tuck, the Black Knight, the Templar and Gurth, the swineherd.

In 1957 when my family moved into our larger house and finally had a real diningroom, my mother put Aunt Harriet's china on display in a corner cabinet there.  We liked the lovely Wedgwood blue.  I think my mother took that color into account as she planned the curtains and wall color for that room. 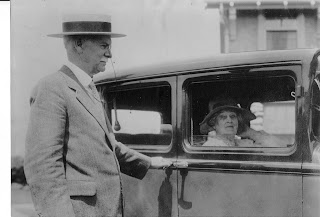 Today, searching in attic boxes for photos of Barlow, I was surprised to discover a photo of two people unknown to me, but labeled in my mother's handwriting, "Uncle Harry and Aunt Harriet." I'm glad that she also wrote their full names: Henry Thatcher Fowler and Harriet Nesmith Fowler.    Aha!  My mother also had the middle name Nesmith, so there's a clue of possible family connection.  I'll leave that research to another day.

For today, I'm creating a photo album in memory of Aunt Barlow.

Here is an undated photo of Dr. John Holyoke Nichols sitting in the Locust Lawn mansion in Danvers. His piano is in the foreground, right. That piano was later moved to the parlor in Pine Knoll, the Nichols family home where John and his siblings (including my grandfather) had been raised, and where I frequently visited in my childhood. Unfortunately I never had a chance to visit this Locust Lawn mansion, which existed from 1856 to 1944. 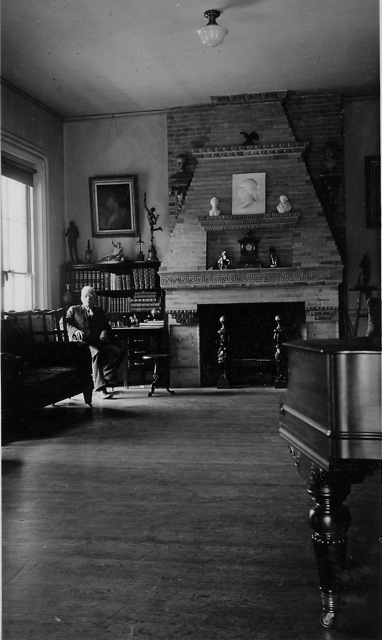 Who is the woman sitting in the chair in the Locust Lawn mansion?   My cousin Janet thinks that it is Nana, our grandmother!    What date?  She and my grandfather William S. Nichols lived temporarily at Locust Lawn in about 1932, says Janet. 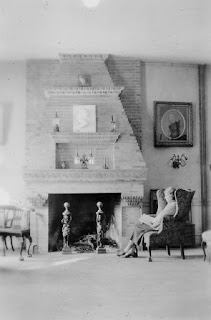 Compare this photo of Locust Lawn entrance to the one in my previous post.  This is closer to what I remember. The date of this photo is unknown, but from an album that included 1930's era photos of LL. 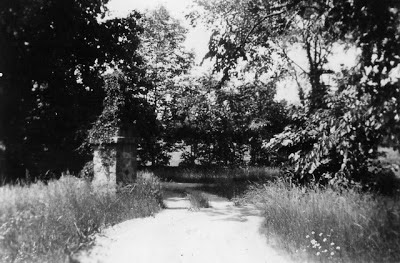 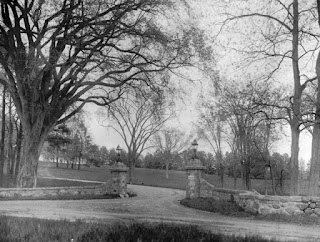 Recently I found some old undated photographs of Locust Lawn, including this view of the main gate into the estate, which was located on a hill in northern Danvers. The road in the foreground was Nichols Street. By the time I was a child, only one of these gateposts stood tall; the top of the other one had fallen down, and both posts were covered by a tangle of vines. But the slope of the long lawn and the curve of the entrance look just as I remember them. The tall elm trees, too, are very familiar, though they had grown much taller and thicker by the time I first played there. What a thrill to see this old image!  I instantly recognized the scene. I grew up in a little house nearby, and often walked through that entrance onto the property we called "Locust Lawn."

The estate had other names in earlier eras, long before my time:  the Morse estate, the Wentworth estate (owned by Philip H. Wentworth of Boston), and prior to those owners, the Kimball estate. "In 1856, Edward D. Kimball of Salem, prominent merchant and ship owner, built on the side of 'Dale Hill' a fine residence," wrote Charles S. Tapley in his book, Country Estates of Old Danvers. "To the south were acres and acres of beautiful lawn." "The huge elm tree near the entrance gates was one of the largest in the country," wrote Mr. Tapley in the 1940's.  Unfortunately, those stately elms succumbed to the Dutch Elm Disease and the hurricanes of the 1950's. After the trees fell, my sister and I played on and around the huge horizontal trunks. By then the "lawn" was more like a field or pasture. The grass grew tall, until someone mowed it with a tractor, or Mr. Hooper's cows grazed it low.

I remember walking back and forth in that pasture with my grandfather as we played an adapted form of golf.  He would push a stake into the ground, and we'd try to aim our golf balls to hit that stake (sort of a hybrid game of croquet and golf). There had once been a small golf course on that estate, but no one was maintaining the greens and we couldn't find the holes. We also had to avoid stepping in cow patties. Later, my mother would bring a wheelbarrow and shovels or pitchforks for collecting that valuable fertilizer to haul home to her backyard garden. 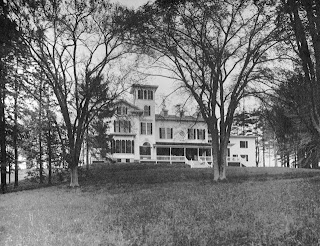 No one lived there any more. The elegant mansion at the top of the lawn (see photo) had been bought by my grandfather's brother, Dr. John Holyoke Nichols, in 1917, but he and his wife never occupied it. I'm told Uncle John had intended to open a private sanatorium there, but WWI intervened. Speedwell School, taught by my cousin Marion Bill Nichols, used the mansion from the 1920's to 1941. After some vandalism in the 1940's, the mansion was torn down. The barn built in 1856 remained standing until the 1970's.  I have many fond memories of playing in that barn and in the foundation of the old mansion, as well as skiing on the east side of the hill and playing in the woods. Locust Lawn, for me, was a wonderful playground.
Posted by Sandy at 11:47 PM No comments: