Peter Tierney, President of the Essex Aggie Alumnae Association, sent me this image of an old torn photograph of "Miss Nichols," a former teacher at Essex Aggie:

He assumed that she might be related to me.  I'd never seen this photo before, but agreed that she was likely one of my great aunts. At first I thought of Aunt May, a well-known teacher in Danvers who retired in 1932. But soon both Peter and I realized that her younger sister Margaret was the one.

Peter did a bit more research and confirmed that Margaret Nichols was teaching at the Aggie in 1919. By 1928 she was listed as a former teacher.  Peter says that the photograph above was taken in 1921, and that she taught Home Economics.

Margaret Appleton Nichols was born in 1878, and graduated in the Holton High School class of 1898. See her graduation photo in my March post; she does indeed look like the woman in this 1921 photo.

I wondered about the setting of that photo. Those steps remind me of porch steps at Star Island, a place that my great aunts often visited. Peter thinks the photo was taken during an outing to Comono Point in Essex; he shared this image of a building there: 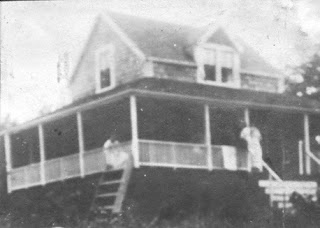 Peter knows a great deal about the history of Essex Aggie. Since 2016 he has been Editor of the Aggie newsletter for alumni.  He invites you to see the newsletters at this address:
http://essexaggie.org/alumni/newsletters/newsletters.html
If you download the January 2017 issue, and scroll down to the 12th page, you see that he reprinted (with my permission) an article I had written for the Danvers Herald about the Hathorne Post Office. He added more information at the end, with a photo of the Hathorne train station that was well used by Aggie students.