First grade in the Hathorne School

My first year in Danvers public schools was spent at the Hathorne School located near the intersection of Routes 1 and 62. I remember walking across Route 1 and approaching the old one-room schoolhouse. It had two doors, but we only used one, the one to the left.  Inside, the room was filled with rows of desks all facing towards the north end where the teacher’s desk was in one corner and a table surrounded by chairs was nearby. At the beginning of the year, the third graders sat around that table. First and second graders sat at the desks facing them. Our teacher, Mrs. Billings, was experienced and capable of teaching several grades in one room. She was creative, resourceful, and flexible enough to cope with the challenges of that year. It was a transition year, not only for me as a shy first-grader, but also for our school and the surrounding area. Big changes were coming, though I did not know it at the time.

I had not attended a kindergarten or preschool. I did not even know how to spell or write my own name. My mother believed that such instruction should be done properly at school, not attempted at home, so I entered first grade without much preparation for school work. Mrs. Billings seemed surprised at my lack of basic skills. I remember going up to the front of the room to reach in a barrel and pull out little yellow paper squares,  which felt soft at the edges. Each square was printed with a black letter. We’d wait in line to have a turn at the barrel, and then return to our seats with a handful of these letters. I don’t remember what we did next with the letters, but I know I liked to handle these worn squares and rearrange them on my desk. Somehow I learned to spell my name and other words.

The classroom was crowded. This was fall 1949, an era of post-WWII population growth. One change happened a few weeks into the school year. The third graders were transferred to another school. That eased the crowding, caused no doubt by the large number of incoming first-graders. Only two grades remained at Hathorne School. I sat with my first grade classmates on the side nearest the entrance door, and the second graders sat in rows to our left.

By spring 1950 remarkable changes were happening outside our windows. My fondest memories of Mrs. Billings are from the days when she invited us to stand at the windows and watch the workmen and big machines transforming the landscape beyond our schoolyard. A bridge and a cloverleaf system were being built to replace the traffic light at the intersection of Routes 1 and 62. Mrs. Billings asked us to observe the steam shovel and count the number of scoops taken in a given time, or how many scoops filled a truck. It was a fun way to have our math lessons!

As the weeks passed, the construction site expanded and our school yard shrank. The chain link fence was moved closer and closer to our schoolhouse. By the end of the school year one cloverleaf surrounded the school site. That was, of course, the last year of the Hathorne School. The building was moved elsewhere to become a residence.  Students were assigned to other schools, and we no longer could walk to school. Mrs. Billings, our patient and wise teacher, went on to teach in other schools. In fact, I had her again in third grade, in my third school. My mother joked that I was very hard on Danvers schools, which kept closing after me! The bus routes became longer each year, until by fifth grade I was assigned to a class “temporarily” located in the Junior High School building next to (the former) Holton High School on Conant Street, my school location for many years to come.

Looking back, I’m glad I started with a one-room schoolhouse from an earlier era. And I thank Mrs. Billings for her guidance as we experienced the transitions of the 1949/50 school year.

This column was written February 2007, revised 3/22/2007 for The Danvers Herald, and published in print April 5, 2007. The Danvers Herald posted it online 4/9/2007 as “Viewpoint: First grade in the Hathorne School.”  In 2015 I posted this copy here because the link to the newspaper archive no longer works.
Posted by Sandy at 9:28 PM No comments: 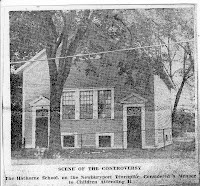 I have found my cousin's photocopy of an old newspaper photo of the Hathorne School. He thinks this appeared in the Salem News in 1937 or 1938.

The caption on the photo is intriguing:

"SCENE OF THE CONTROVERSY The Hathorne School, on Newburyport Turnpike. Considered a Menace to Children Attending It."

Does anyone know the story?

You can email me privately by using this Email form. Or you can add a Comment to this blog entry if you want others to be able to read your message.

The Boston Globe published an article on April 2 about one-room schools in Vermont and the struggle to keep a few of them open. See Little Schoolhouse's end seen as sad and inevitable.

And from Danvers history, thanks to Town Archivist Richard Trask, this quote from the Annual Report for the Danvers School Department for 1950 (p.3-4):

Much controversy was engendered over the seizure of the land of the Hathorne School for highway purposes by the state and the resulting demand that the building be moved. Two years previously in anticipation of this the town bought a lot for the relocation of the building on Maple Street. However, with the erection of the new building on Pickering Street capable of accommodating the pupils from this district, it seemed inadvisable to expend capital funds to recondition this 100 year-old building. The School Committee, therefore, voted in December to discontinue the use of this building for school purposes.

In 1949 when I entered the Hathorne School for the first time, I was not aware of this controversy. I was just going to our little neighborhood school. My essay about that year is scheduled to be published this week in the Danvers Herald. Look for it in the Opinion section.