During a very relaxed visit with my sister in New Mexico, I enjoyed knitting while she crocheted.  I re-learned how to knit as I experimented with making wristers. See my previous post (Knitting, below) and my most recent column: 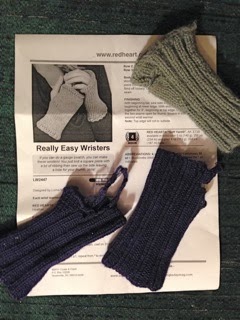 Here are some photos of wristers past and present.  At right you can see the old worn blue wristers from my childhood, and a gray one I had knit years ago.

On the internet I found some simple instructions for knitting wristers. I printed several variants, and bought them in my suitcase, hoping that my sister might have yarn and needles.

As she drove me from the airport to her home, I mentioned my wish to try knitting again. We stopped and bought knitting supplies en route, selecting yellow and black, the colors of The Expandable Brass Band in which I play. 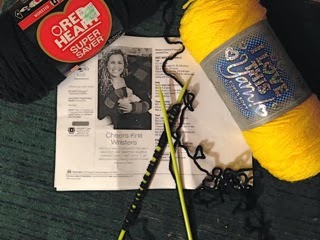 My first knitting attempt (casting on stitches, above) in over 40 years! 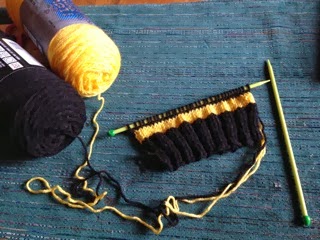 Progress was quick. For this first pair, I was using size 10 knitting needles. The resulting wristers turned out to be too large for me, but perhaps good for another musician in our band.

After I finished that first pair of black and yellow wristers, I switched to size 6 needles for the next pair. My sister had given me a big yellow polka-dotted bag, which worked well to hold the yarn as I knit. Here I am sitting in her living room, knitting a new pattern. 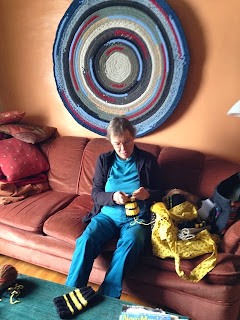 Note the short round needles used this time. I'd never tried that style before. Very handy. 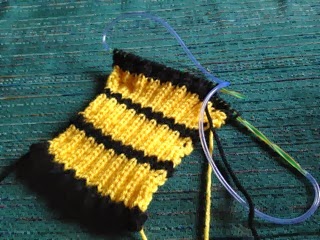 I changed the pattern on this one, knitting K2, P2 ribbing all the way up. 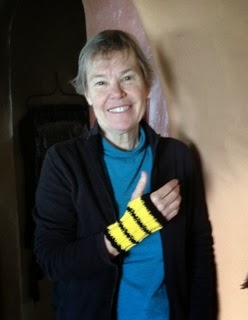 By the time I returned to Massachusetts, I had knit three pairs and was working on a 4th.  On the cold morning of Sunday December 8, as our band played outdoors for a fundraiser (the Hot Chocolate Run, Northampton, MA), several of my fellow musicians appreciated the warm wristers. Over 5,000 runners and walkers passed us as we played.   [See photos on our band's Facebook page: www.facebook.com/ExpandableBrassBand]