My father's factory in Danvers was called UNEX Laboratories. UNEX was the brand name of the hearing aids he designed and manufactured there. He liked to say that his products were "unexcelled" – hence he selected the name Unex. Over the years his company, Nichols & Clark, Inc., developed a variety of other products that carried that name. One of them was a plastic molding machine. In 1996, reflecting on his working life, he wrote, "To produce our products we even developed a hand molding machine and built a side business of custom injection molding plastic parts for the Route 128 trade!"

I remember his early experiments with plastic. Plastic material in the form of granules was poured into a machine that heated the material until it melted and became soft enough to be injected under pressure to fill a mold. This process could create many exact copies from one mold. While he was learning the process, he used pre-made molds for small toys, such as cowboys or animals, and shared the results with us, his young daughters. We enjoyed this influx of colorful plastic toys, and were not bothered by imperfections of some of his early trial runs.

These memories came flooding back when an unexpected email arrived in February 2017. A correspondence ensued, photos were shared, and I learned more about the plastic molding machine that my father developed. He not only used it in his factory, but also began selling the machine itself as a product called the UNEX JET.  The photo at right was sent to me by Jeff Saxton of St. Louis, MO, who still actively molds plastic parts with it!

Jeff's email inspired me to write the following piece for the Danvers Herald.

During my childhood, my father designed and redesigned hearing aids, gradually making the units smaller and lighter. The old metal cases, recycled from boxes in which nails were once sold, gave way to plastic cases for the newer models. Daddy was an electrical engineer, not an expert in plastics. For a while he had to rely on other companies to produce and supply the plastic parts needed for the assembly of his UNEX hearing aids. At some point he decided to learn how to make plastic parts himself.

Daddy’s early experiments with plastic were fun for us as children. The first molding machine he acquired came with molds for shaping small plastic toys. As he learned to operate it, he made soldiers, cowboys, Indians, and other figures in bright colors. The pieces were not always perfectly formed, but we weren’t fussy. We enjoyed the output of his molding experiments.

It was like getting prizes in the bottom of our breakfast cereal boxes, but these came freely, without having to eat the cereal.  I recall some talk about whether Daddy might begin selling plastic toys to cereal companies, but I don’t think he was serious. He also laughed off a crazy proposal that came his way about making an electric toothbrush. He exclaimed, “Who ever heard of such a thing?” (Years later he admitted that he’d missed an opportunity on that one.)

I believe this became a good part of his business after hearing aid sales, because of medical advances, had decreased. He also began to market his improved molding machine. Later, the rights to that machine were sold to another company.

Last week I was surprised to receive an email from someone who owns one. Jeff Saxton, of St. Louis, MO, wrote, “Hello, I own a Unex Jet benchtop injection molder, and wondered if you had any further information on the Nichols & Clark firm as it relates to these small molders?”  I provided some information, and he shared a photo of his machine, which I recognized instantly. He bought it, used, in 1995 to make plastic parts for model train kits. With it, he has made thousands of parts (in eight different dies that he machined expressly for this machine). “It still works great, and that's a testament to your father's design.”

Jeff added some history that I had not known. These machines were sold by Hinchman Manufacturing  (Roselle, New Jersey) in the 1960’s, and later by Kissam Manufacturing (Mountainside, New Jersey), a company founded in 1976. Trade schools and small machine shops were the major buyers. Jeff’s machine wears a Kissam label. On the Internet we found a photo and description from Hinchman. To my eyes, the UNEX Jet looks identical, whether sold by Nichols & Clark (UNEX Laboratories), Hinchman, or Kissam.

I’m glad to know that some of them are still around and being useful. My father, Nathan P. Nichols (1912-1996), would have been pleased.  I certainly enjoyed being reminded of his role in plastics, and the toys that came from his early tests.

Below are additional images sent to me by Jeff Saxton, who has been researching the history of the Unex Jet, and trying to trace the source of his machine. 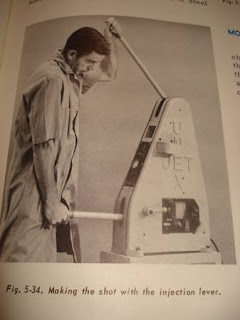 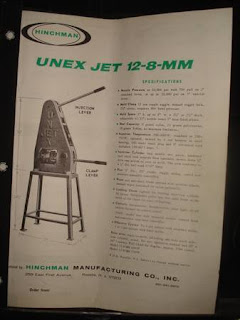 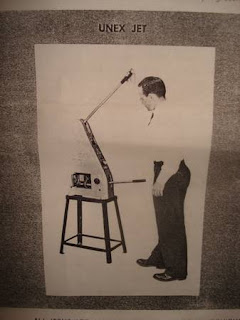 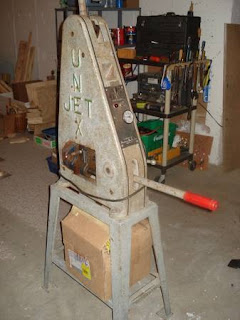 Jeff added an interesting note about the image above (from an ad). "See the cardboard box tucked under the machine? It's not just there as junk. I did the same with mine – the funnel that you feed the pellets into often spills over and so that box catches all the loose stuff that falls through, for re-use later. Mine doesn't do it quite so bad, as I rigged up a set of thin brass 'flow directors' that closed off a number of the places where stuff could escape. Also makes the floor easier to sweep up and walk on, since it's not covered in plastic pellets."

Jeff also wrote on 3/7/17, "Another small piece of the puzzle I have found. It's a PDF of a trade publication from 1966 -- the ad in the lower right of page three for Cope Plastics..."  That ad, in the January 1966 issue of American Vocational Journal, lists "UNEX JET Injection Molding Machine" at the end of a long list of items under the heading "COPE PLASTICS for ALL Your Needs in Plastic Craft Supplies."  Jeff commented, "I've been to the Cope location hundreds of times after they moved into St. Louis proper from their original Godfrey, Illinois, location. So Cope was active in promoting the use of Unex Jet machines locally to trade schools or Industrial Arts programs. I would even bet my machine was bought via them by whoever the original owner was."
Posted by Sandy at 3:15 AM 2 comments:

Eloise came to Danvers when I was almost a teenager. My cousin Janet, then probably twice my age, brought her. I didn't know what to think, at first. Eloise was such a city girl; I was a country girl and couldn't immediately relate to her life. But Janet really loved Eloise, and soon I too was laughing heartily at the escapades of young Eloise.

Eloise came back into my life this week, and it was a joyous reunion. Oh! Eloise!

On Wednesday March 1, while driving from one errand to another in Amherst, MA, I passed the sign for the Eric Carle Museum, paused, turned the car around, and drove into that parking lot. I'd recently read in the newspaper about their newest exhibit, and was curious to see it.  I only intended a 5-minute peek, but I probably stayed half an hour, delightfully revisiting the world of Eloise, and learning more about her origins.

This very LARGE, life-size image greeted me as I turned from the open lobby area into the small passageway to the special exhibit room: 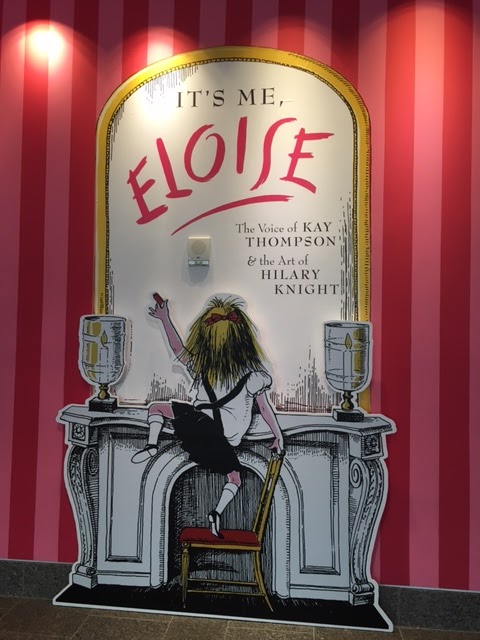 Here are a few more images from this remarkable exhibit.  I am so glad I stopped to see it.  I was surprised by the strength of my emotions for this little girl I'd almost forgotten. 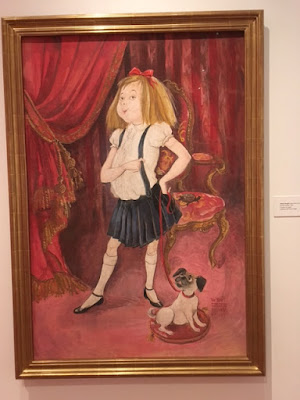 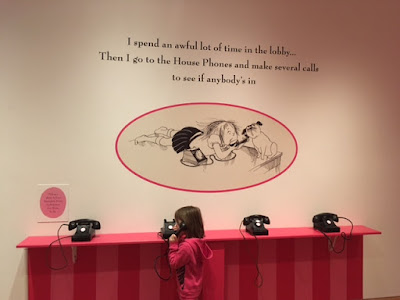 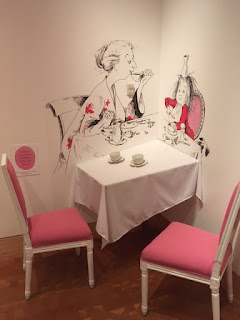 What a clever invitation to join Eloise and her Nanny for tea!  I immediately wished I could invite my cousin Janet to join me.  (I'll invite her to view this blog entry, as soon as I finish typing it.)   I'm sure Janet will enjoy the fact that the Eric Carle Museum drew on the walls.  In Danvers, Janet and her husband Jed drew colorful characters on the walls of their sons' bedroom to entertain those boys. Janet now lives in Maine, in a house with many examples of her artistry painted directly on the walls.

I'll thank Janet for bringing that book to Danvers, back in the middle of the 1950's, and introducing me to 6-year-old Eloise.

And, I'll tell my friends to visit the Eric Carle Museum of Picture Book Art.  For seniors like me, the entry fee is only $6.
Posted by Sandy at 5:44 AM No comments: