The first real snowfall of the season arrived the afternoon before Thanksgiving, transforming our neighborhood into a bright, white wonderland. I had barely had time to roll up and put away the hoses that had, in the previous season or two, been handy for transporting water from our rain barrels to our lawn and garden.

This seasonal transition, and the way it almost catches me unprepared (even though the general timing of it, in the big picture, is quite predictable), reminds me of the old days in Danvers. My mother used to comment about the overlapping of the seasons. She meant particularly the seasons of my father's favorite sports: sailing and skiing. There was a scramble each fall to get ready for ski season because he'd continued sailing until the last minute. Getting the boat hauled out of the water, brought home from Marblehead, and stored in the barn took up some of the weekend time that otherwise could have been spent in ski-trail maintenance and preparation of the rope tow. (My family ran the ski tow at Locust Lawn Ski Club in Danvers). The same problem happened each spring. My parents loved spring skiing, and delayed preparing for the sailing season, causing a last-minute scramble to get the wooden sailboat ready for the first races in Marblehead.

I am writing a column this week about skiing at Locust Lawn, remembering the fun and convenience of that local ski hill.
Posted by Sandy at 9:22 PM No comments: 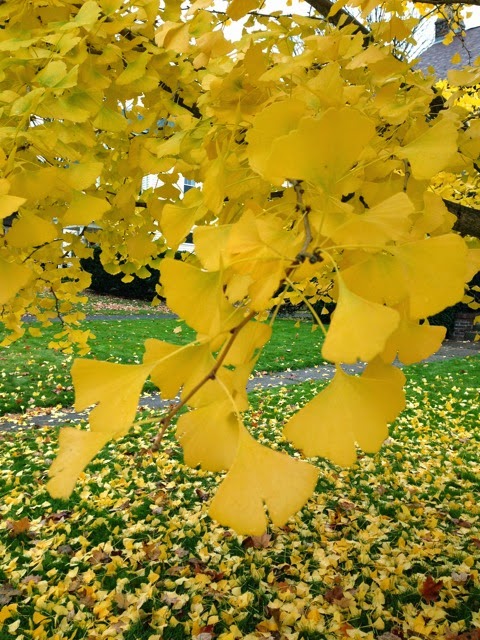 These bright yellow ginkgo leaves caught my attention yesterday near my home in western Massachusetts.

I recently enjoyed an illustrated talk about the history of the ginkgo tree by renowned botanist Peter Crane, Dean of the School of Forestry and Environmental Studies, Yale University, and former director of The Royal Botanic Gardens, Kew, UK. He has written a book,  Ginkgo: The Tree That Time Forgot.  I attended his talk because I was curious to learn whether a story I'd heard in my childhood contained truth or not.

A large ginkgo tree grew near our home in Danvers. I liked its fan-shaped leaves, which were unlike those of any other tree.  Its name was also unusual: "gink-go."  I never had trouble remembering the distinctive name of this tree with such distinctive leaves.

My mother said we were lucky to have only one ginkgo tree. With multiple trees we might have to contend with stinky fruit. She said it was important not to have male and female ginkgo trees in the same neighborhood. Then there would be fruit. Huh?  I couldn't quite believe her. That idea was just too strange. As far as I knew, trees were not male or female. (But I kept my thoughts to myself.)

Dr. Crane confirmed that there are male trees and female trees, and the ginkgo fruit has an unpleasant smell. My mother was right. Ginkgos are unique trees, unrelated to any other trees living today. They have a very long history, and many examples have been found in fossil records around the world.

Personally, ginkgo leaves are special to me for another reason. Beautiful yellow ginkgo leaves have been selected by my daughter in northern California as a backdrop for many photographs of her children, starting with this one of her first child at age one week: 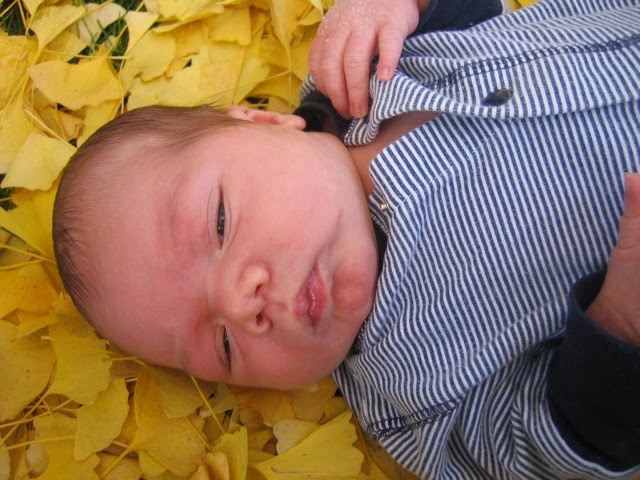 I'll fly to California this week to join him for his 9th birthday.  Perhaps we'll play together in the ginkgo leaves.
Posted by Sandy at 3:14 PM No comments: