An 1852 edition of Uncle Tom's Cabin, originally owned by my great great grandmother, Mrs. Elizabeth (Hunt) Stanley, was recently shown to me. (See previous post.) I'm trying to imagine what this book meant to Mrs. Stanley or others in the family at that time. Did they read it? What did they think of it?  What had been their experience with the institution of slavery? Were they active as abolitionists?

Before I begin digging into family history in an attempt to answer any of those questions, I have been learning more about the book itself, which I'm now reading for the first time. I am really enjoying the writing. I'm glad I didn't have to read this in school (as so many people did); I'm sure I wouldn't have appreciated it so much then. The descriptions of society and politicians and family relations all mean so much more when you have lived many decades, as I have now.

Uncle Tom's Cabin was a controversial and very influential book in the 19th century. It was a "sensation" according to Alfred Kazin (Introduction to the Everyman's Library edition of Uncle Tom's Cabin, 1974): "on publication day in 1852 it sold 3,000; within the year there were 120 editions, 300,000 copies..."   It became the first American novel to sell more than one million copies. It has been translated into many, many other langages.

I wonder how many other copies from 1852 have been preserved?  I note that the TEXT from the original edition was reproduced in the Everyman's Library edition which I've borrowed from my public library. I also have a version of it on my Kindle, which is convenient to carry as I travel. I don't feel any need to own the fragile original edition. That is a special treasure, but I'm more interested in the ideas within and influence beyond that particular physical artifact.
Posted by Sandy at 10:52 PM No comments:

On Thursday November 15, 2012, a California man named Thomas Kaska walked into Yesterday's Books, a bookstore in Modesto, CA, and purchased a two-volume set of Harriet Beecher Stowe's famous novel, Uncle Tom's Cabin, published in 1852.  He was delighted at last to acquire this valuable first edition, which he'd spotted there some years before (when the price had been too high).  As a schoolboy he had once written a paper about Harriet Beecher Stowe, and his father's second wife was a descendent of Harriet Beecher Stowe, so he had long been interested in that author.

Inside the books he found various newspaper clippings now fragile and darkened with age. He noted that the volumes had once belonged to "E. Stanley, Salem, MA" and became curious about the original owner. Some of the clippings mentioned Nichols relatives in Danvers. Thomas searched on the internet, found this blog, and sent me an email that included this surprising information: 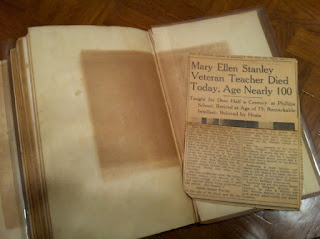 "I have a news clipping of a Miss Mary Ellen Stanley. She was born July 14,1839 and died just short of 100 years old by a few months. Apparently she was a school teacher for over 55 years until a new law forced her to retire. The obituary... said she was survived by two nieces a Mary and Margaret Nichols, and two nephews a Dr. John H. Nichols and Rev. William Nichols. Through Google I found you and hope you recognize these people.  Looks like from your blog you also enjoy history and retelling of memories past..."

Thomas asked whether I might be a descendant, or if not, whether I could help him find descendants to whom he could give these clippings.

Well!  What a surprise!  I wrote back, "Yes, I recognize the Stanley name and her nieces and nephews.  Rev. William Stanley Nichols was my grandfather. Coincidently I'm in CA this week for Thanksgiving with my daughter and 2 grandsons. I would be interested in reading those newspaper clippings. Thanks for your offer."  Within days I had met Thomas and acquired the clippings. I also took some photos of the books to share with other family members. 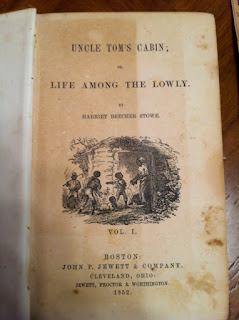 Since the discovery of these clippings and the old books, I have begun to learn more about the Stanleys. I'm interviewing various family members and collecting stories. I have also begun to READ Uncle Tom's Cabin, a classic piece of American literature that I had never read. The night before meeting with Mr. Kaska, I downloaded a free copy onto my Kindle and read the first chapter. At his house we compared the text of the first page of the first chapter, and they matched. By now I have read hundreds of pages and am caught up in the action of this remarkable book. 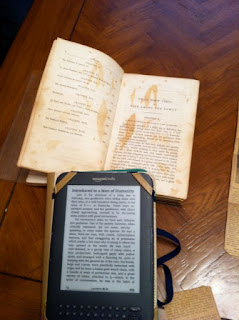 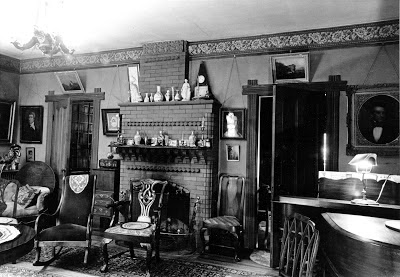 This photograph of the parlor at Pine Knoll, the Nichols family home at 98 Preston Street, Danvers, MA, was taken in the late 1960's, but looks remarkably like images taken in the 1890's. The parlor, as  the most formal room in the house, was used only on special occasions. Very little changed in this room over the decades.  Click on the photo to see a larger, clearer image.

Julie Snow, a young photographer from New York City, took this photo. She became entranced by this old home when she visited it and asked permission to set up special lights and take photographs. Permission was given, but none of us thought about the amount of electricity needed to run those bright lights, which soon blew fuses!  Nevertheless she took some special photographs that we now treasure.

This month I have written about some of my experiences in the Pine Knoll parlor. See my Danvers Herald column, The Parlor at Pine Knoll.

Through the door on the left you can see the library, which was filled with books that had belonged to my great-grandfather Andrew Nichols, civil engineer. He built the first part of this home in 1861, and in 1880 added this wing that included the parlor and library. A friend of his came for a house tour in 1881 and wrote an article titled The Nichols Museum describing this home.

The Pine Knoll house survived until 1975 when arsons set it on fire and destroyed this piece of Danvers history. It is a shame that so many antiques perished. Fortunately, the library collection had already been moved out of the house; it was donated to Harvard University.