I'm thinking this week of Tom and Emily Haggerty, who were married in 1971. I had a brief visit with them just after Thanksgiving at their home in NH. Tom was home from a recent hospitalization, still facing some health challenges, but he was in good spirits. It was a pleasure talking with him. Emily served tea, and we had a delightful visit.

Emily is my cousin. She and I both descend from the Andrew Nichols who built "Pine Knoll" in Danvers in 1861. Andrew and his wife Lizzie (Elizabeth Stanley Nichols) had eight children there, including the boys who would became our grandfathers.

Emily and I also share a connection to an antique wedding veil. Five brides in this Nichols family had worn that veil, beginning in 1833 when the veil was probably brand new. Emily was the last bride to wear it; she and Tom were married in Beverly, with a reception at Glen Magna in Danvers. I had worn it in 1965, with a reception at my parent's home at Locust Lawn. We each considered passing the veil to our daughters for their weddings, but by then the fabric had become too fragile for active use. In January 2000 Emily and I donated that beautiful veil to the Danvers Historical Society.  Click here for more about this 1833 veil.

This weekend I will see Emily again. We will gather at South Church in Portsmouth, NH,  February 4 at 2:00 pm for a celebration of Tom Haggerty's life. Unfortunately he was not able to regain his health; Tom died January 20, 2017. He will be greatly missed by family, friends, and the many former students who considered him one of the best teachers they ever had. Click here for Tom's obituary.

A scholarship fund in memory of Tom has just been announced:

Today, January 8, is the date of my father's birth. I am remembering him in a special way this week, thanks to a telephone conversation with one of his friends, who commented on how much fun they had had together. “He was just fun! So much fun!”

What a wonderful way to think of my father, Nathan P. Nichols. Yes! He was an expert at having fun. The more I thought about this, the more examples came to mind. I've been smiling all week, mentally compiling lists of the ways we had fun with him.

Here's an example from 1974, when I had flown back to Danvers for a visit, bringing my two young children from California.  There was snow on the ground, and my parents brought out a Flexible Flyer sled for us to play with. We took turns on that sled, but Nick soon fetched a boat from the garage so that he could slide down the driveway without waiting for a turn on that sled.  I feared that he might crash into a tree along that steep curved driveway, but he slid with confidence, and arrived safely at the bottom. Soon he was offering rides to others.  In this photo, he and my mother are accompanied by my daughter Tonya. 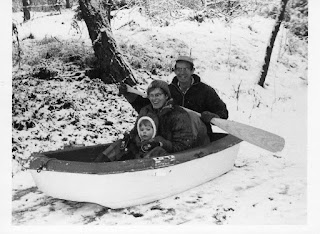 This weekend I have been writing a piece about my father's playfulness.  I will probably submit a composition to the Danvers Herald soon.

“He was just fun! So much fun!” A friend of my father, a man years younger than he, recently made that comment to me, triggering a flood of memories. Twenty years have passed since my father’s death, and perhaps fifteen since I last visited this friend. All week I’ve been smiling, recalling my father and appreciating the words of his friend: “He’s still my inspiration. He was so great to be with.”

Coincidently, this week includes the anniversary of my father’s birth, January 8, 1912.  His full name was Nathan Paddock Nichols, but he usually went by “Nick” or the initials NPN, which he applied with branding iron to his wooden skis. Many people called him “Nate,” but I just called him “Daddy.”

This is a fitting time to reflect on his life and playfulness. Yes, he certainly did know how to have fun. He managed to balance the serious responsibilities of life (business ownership, raising a family, contributing to his community) with interludes of glee. He didn’t let work or worries interfere with the fun of living.

He loved to play ping pong on the old table in the basement. He delighted in the game of Skittles, which we played so often that the wood wore down at the entrance where we spun the skittles. He was always eager to play card games, especially Pounce, which he played with such gusto that some cards got damaged as we collided in competition for the same spot. (Mommy wouldn’t let us play with a new deck; for Pounce we had to use a worn deck, of which we had many.) I remember wonderful games of Hearts or Oh Hell with my parents and my sister on a card table in the living room.

One Christmas someone gave him a tabletop hockey game, the kind with handles sticking out so that multiple players could manipulate the skaters, trying to control the puck.  We played and played and played with that game, for years. My father also spent hours watching hockey on TV. I can see him reclining comfortably in the chair by the TV, absorbed in whatever game was in season: tennis, football, or ice hockey.

Outdoors, my father was an avid skier, tennis player, and sailor. On frozen ponds in Danvers, my parents and their friends played informal games of ice hockey. On a small plot beside his first Nichols & Clark factory (a garage near our back yard), he pitched horseshoes with coworkers. On the roads of Danvers, my father played “hide and seek” with his mobile Ham radio buddies, ostensibly practicing for civil defense, but having enormous fun outwitting the other players by positioning his car in hard-to-detect places.  He identified himself as “W-1-H-V-N High Voltage Nick.”

No matter where my father was, he could find ways to entertain himself, even while doing chores. Rather than turn garden soil with a spade or other hand tool, he’d design a device to attach to the power lawn mower. The whole project took much longer this way, but he had fun problem-solving. He was, after all, an engineer and inventor. He designed better ways to build hearing aids, and enjoyed the challenge of designing smaller devices. He often proudly proclaimed that he had created the “world’s smallest” hearing aid, which would fit in a pocket, or under a matchbook cover, or a dime (the examples changing for each new, smaller product).  He worked hard, but took time to play, and to draw others into his fun.

He creatively designed Halloween mazes in the old barn. He constructed an impressively tall costume using leftover sailcloth. He designed a special version of Tiddly Winks golf, which had us all laughing as we crawled around on the living room rug, trying to beat him on that tricky 9-hole course.

I am so very glad that I had such a father. I’m also glad to have re-discovered, while sorting and disposing of old files in January 2017, a 1996 letter from my father’s friend. That letter prompted me to make a phone call. I’m thankful that his friend responded with such enthusiasm, recalling “so much fun!”
Posted by Sandy at 9:28 PM No comments: