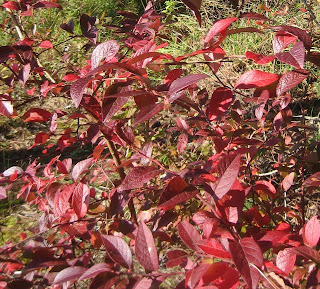 On a recent walk in a wooded area near a reservoir, an intensely red bush caught my attention. I stopped to admire it and took this photograph. Such memories flashed in my mind! I'm writing about them for the next column.
Posted by Sandy at 8:28 AM No comments:

This month's column in the Danvers Herald (first Thursday of the month) tells another Halloween story. Last year I wrote about the Screech Owl incident, which happened when I was very young; this time I've written about a Halloween when I was older and wanted to trick-or-treat without a parental escort.

See "Halloween Independence" (below), which was published online October 1, 2008.

I want to thank my friend Peggy Melanson for encouraging me to put this story down in writing. I attended one of her story-telling workshops several years ago and happened to tell this Halloween story when it was my turn to practice telling a tale. Ever since, Peggy has urged me to write it down and to submit it to my hometown paper. Finally I did.

When my sister and I were young, but feeling old enough to go Trick-or-Treating on our own, we pleaded with our parents to let us go alone. We wanted to walk down Nichols Street in our costumes and not have parents in tow. Our parents were quite resistant to this idea, perhaps because of the long, dark, wooded section between our house and the cluster of houses to the south. All our friends lived down near Durkee Circle or beyond. No other children lived up near us. Our friends were able to go walk Trick-or-Treating without their parents; we wanted to do the same.

Today those woods are gone, eliminated by construction of Route 95, which divided Nichols Street into two disconnected segments. (The upper portion has been renamed Conifer Hill Drive.) I’m writing about the earlier era, when Nichols Street was continuous and had a stretch without houses or lights. Stonewalls, trees and fields bordered the road. Near the end of one field was a dirt pullout or parking spot that was often strewn with litter. It was by far our best hunting ground for collecting bottle caps, but that’s a story for another day. My sister and I rarely encountered people drinking there, nor did we have fears of the place, but no doubt our parents were concerned about possible dangers, especially at night.

I don’t remember what costumes we wore that Halloween, but I clearly recall the sequence of events in our steps towards independence. First we pleaded and then we negotiated. Our parents reluctantly agreed that we could venture forth alone, but they insisted that we go first in the opposite direction to Granddaddy and Nana’s house. That seemed reasonable, so we agreed. We prepared with much anticipation and set forth all by ourselves on the well-beaten path through our yard and around by the old garage towards our grandparents, who lived next door. The passageway between that garage and the stonewall was narrow, tree-covered, and quite dark. We strode along with confidence, happy to be on our own.

A sudden deep “BOO!” shouted from the far corner of the garage stopped us in our tracks. Out jumped a strange and frightening creature! It towered above us with big silver eyes shining brightly, reflecting the light of our flashlights. “Boo!” it said again, and lowered its pointed head to inspect us. We were terrified!  Never had we seen such a creature, tall and white and angular. We shrieked and ran as fast as we could back to our house. No more independence for us, not with that scary thing out there!

Mommy reassured us and calmed us down. Then she let us in on a secret: Daddy was inside that creature. What a surprise! We never expected him to dress up for Halloween.  Well, that changed everything! We were quite willing to go Trick-or-Treating with him now. We were proud and happy to escort this creature down Nichols Street. It was such fun to watch the reactions of friends and neighbors.

We all marveled at the costume Daddy created. It was tall, much taller than his 6-foot height; he looked out through a small hole in its chest. Inside, he used a pole to hold up and manipulate the head. Long sheets of white cloth (old sails from his boat) draped to the ground. Huge webbed feet, painted yellow, protruded in front. “Goon feet,” he called them. The Goon head was triangular with a long beak, and rectangular eyes made of aluminum cases (from his hearing-aid factory). As he lowered the head to “look” at small children, he could also wag a tail section of fabric behind him, using another hidden pole. The Goon was a very engaging, animated creature – fun to interact with after we had recovered from our fright.

I’ll never forget that Goon costume and the way it changed our minds about allowing a parent to accompany us on Halloween night. What a clever father! He used that costume again on other occasions. He even skied in it during ski carnivals at Locust Lawn. His Goon costume was always a tremendous success and he clearly enjoyed the role. I’m glad he chose such a creative way to confront our premature push for Halloween independence.
Posted by Sandy at 8:30 PM No comments: