This week as I prepared a quick meal, I decided to add some walnuts. To chop the shelled walnut 'meat' into small pieces, I used an old familiar tool, pictured here. 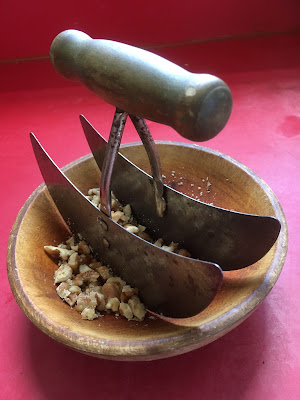 Ah, the memories!  My mother used this same wooden bowl and chopper. I think of her especially during this week that includes her birthday (May 5) and Mother's Day.

I paused to appreciate this simple tool. The handle is sturdy and comfortable in my hand. The wooden bowl is smooth and well-oiled inside, no doubt polished with oils from nuts chopped there over the years.

Previously I'd taken this tool for granted. Today I examined it carefully, and documented it in photos. It is a treasure from my past that is still useful in my kitchen. I bet it will continue to serve future generations. A simple, practical tool -- appreciated too as a reminder of my mother, who was practical and efficient. 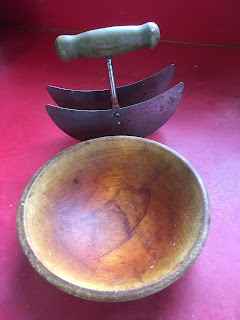 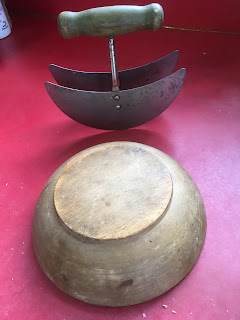 An old dark photograph taken years ago within the Pine Knoll kitchen came to my attention this year. In it, I can see, dimly, part of a refrigerator that resembles an ice box. Something about it caught my attention, and then, on closer examination, surprised me. 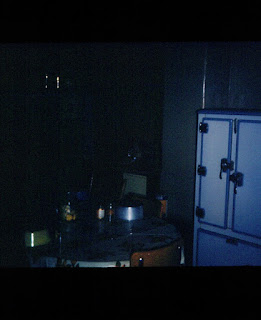 I have no specific memories of that refrigerator at Pine Knoll, nor of other details inside that kitchen, but do remember the location of the kitchen. It was in the basement, not far from the stairs, and adjacent to the dining room where the Nichols family gathered for festive meals celebrating holidays, birthdays, or other anniversaries. I gave many childhood memories of that large basement dining room with its greenhouse windows along the south wall, fireplace on the north side, and tall china cabinets at the west end.

But I hardly, if ever, ventured into that kitchen space. No doubt children were discouraged from going there when big meals were being prepared and served. So, I have no knowledge of a refrigerator there, and probably wasn't even alive when that photo was taken.

Yet... that refrigerator is STRIKINGLY familiar to me.

Guests at my current house often comment about the old "ice box" in our kitchen. We point out that it isn't really an ice box, because it has an on/off switch near the top center, and the brand name Kelvinator. But it seems designed to look like the former ice boxes.  Here are photos of OUR old refrigerator: 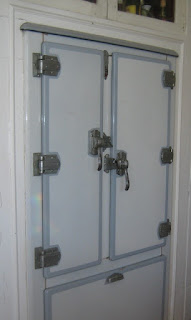 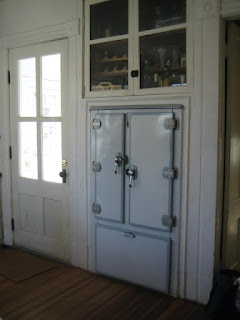 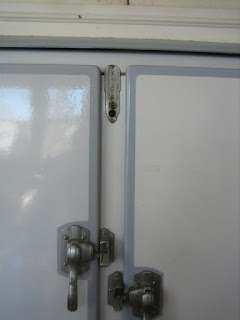 We think that this Kelvinator was added to our house in the 1920's.  We know that the kitchen had been remodeled in the 1920's after a serious fire. The house had been built in 1894. We first visited it in 1994 and marveled at the way the family there made creative use of the old defunct Kelvinator built into the kitchen wall: its shelves were stocked with crayons, paper, and other art supplies for their young girls to use. We bought the house in 1995, and have used the Kelvinator to store Tupperware and other containers. We've also sometimes used it as an ice box for parties, putting in blocks of ice to keep sodas, beers and other beverages cold. We learned – from the melted ice water leaking onto our kitchen floor – that this "ice box" lacked a drain. Oops! Since then, we've been careful to put the ice in buckets that can be removed and emptied.

NEVER, in my years of using that Kelvinator in our home, did I guess that a very similar Kelvinator had once been used at Pine Knoll, the Nichols family homestead in Danvers.  What a surprise to compare these photos and conclude that we indeed have the exact same model!

Cousin Stuart Brewster, who grew up at Pine Knoll, has reviewed these photos and concurs.

Today is the last day of February, thus the closing of "Black History Month."

For me, it feels more like an opening. This evening I attended a Zoom session with people interested in  researching Black history in New England. When I introduced myself as a Danvers native and mentioned my recent discovery of an ancestor who had African slaves, another participant reached out to me. She is already in touch with people who are researching people of color who were enslaved in Danvers. We've exchanged email addresses. I don't know where this will lead, but it feels like an important opening... an invitation for me to learn more.

The Zoom meeting was hosted by Atlantic Black Box, an organization that has been offering many good educational programs. "What Happened Here" is the title of their speaker series. Out of curiosity, I tend to listen in. I've enjoyed several of their programs this winter – without officially joining them.

Last week's program pulled me in. I'd already heard a bit about Phillis Wheatley, a young African slave who wrote poetry and managed to get her poetry published. I was curious to learn more, so signed up for the February 24 Atlantic Black Box program with Dr. Cornelia Dayton, who would speak of "Lost Years Recovered" – her research into a puzzling gap in the story of Phillis's life. Where did Phillis and her husband go when freed from slavery?  Here's an excerpt from the promotion for Feb 24:

Phillis Wheatley Peters (1753 – 1784) was enslaved and educated in the household of prominent Boston merchant John Wheatley. Her poetry brought her unprecedented international fame. Phillis's name was regularly invoked by colonists and her achievements were a catalyst for the fledgling antislavery movement.Yet in the years when slavery was ending in Massachusetts, Phillis and her husband, now a free Black couple, moved to an interior town north of Boston. Concerted opposition from many neighbors made it impossible for them to stay.What do the extensive court papers in this case tell us about town politics, race-based hierarchies, access to the law and citizenship, and the final four years of the African-born poet Phillis Wheatley Peters’s life?

I did NOT expect this program to have any connection to Danvers. It isn't really a Danvers story, but...

The "lost years" were spent in Middleton, right next door. The name of a Danvers official was mentioned, and I began to reflect on how very, very close this was to where an early Nichols ancestor first had property (in the Ferncroft area, where today Danvers and Middleton meet).

At the conclusion of that February 24 program, participants were invited to attend a members-only followup discussion Monday, February 28, about doing research re Essex County history. I wanted to be there. So I went to the Atlantic Black Box Project website and paid for a membership.

Here's the description of what I have joined:

Atlantic Black Box is a grassroots historical recovery project that empowers communities throughout New England to research, reveal, and begin reckoning with the region's complicity in the slave trade and the global economy of enslavement while recentering the stories of its racially marginalized groups.

As a retired librarian I'm delighted to meet with these people who are eagerly using libraries, museum archives, and online databases to discover parts of history that had previously been hidden or hard to find. I'm inspired by their willingness to share what they learn, and to seek advice from each other about where to search next.