In December I visited my sister in New Mexico and enjoyed a delightful day of skiing -- my first time on downhill skis in over 25 years.  The ski equipment I rented was dramatically different from anything I had used before.  The boots were bizarre, opening up from the back and having many adjustment options.  The shape of the skis looked weird, with exaggerated side curves and rounded, not pointed, ends.  How the technology has changed!   I wondered if I'd be able to adapt, and whether I'd remember how to ski. As it turned out, these new skis helped me ski with confidence and ease.
Skiing down the mountain trails with my sister (our first time skiing together in probably 40 years) was a joy,  and triggered many memories. Her graceful turns reminded me of the way Daddy had skied.  I thought of our family's long history with skiing, and thought too about the changes in the shapes and lengths of skis over the years.

My very first skis were short, straight wooden "toy" skis with a high curl at the front, and a band of red paint on the wood. Simple straps tied the little skis to my rubber boots.  I could toddle around on these skis on a relatively flat area.  Later my baby sister used these skis and I played with her while our parents (the real skiers) skied down the real hill.  Jean and I amused ourselves trying to "ski" down the short gentle slope of an embankment, but I think we mostly tumbled and fell,  laughed and played in the snow.

My mother's first skis, in contrast, were very, very long.  She didn't learn to ski until she was in college, invited to the Dartmouth Winter Carnival.  She had friends in the Dartmouth Outing Club (D.O.C.) who helped set up her equipment and taught her to ski.  She loved to tell us stories about those Dartmouth boys and her outing club trips from Vassar College to Hanover, NH -- an adventurous drive in the automobiles of the 1930's.   She kept those old skis.

Yesterday I found them in a forgotten corner of a storage closet, and pulled them out to measure just how long they were:  6'6" tip to tail. (She was only 5'4'' tall.)

Let's look closely at that old technology.    I've taken some photos to show the details. 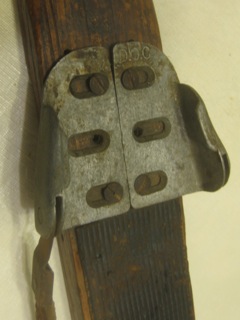 The wooden skis are much older than the binding.   How do I know?

Years ago I had found some of my mother's letters home from college describing her ski adventures at Dartmouth. [I have given copies of those letters to the Dartmouth Outing Club and the originals to Vassar College Archives.]  She apologized to her mother for some wear and tear on "your skis"!   My grandmother's skis?   I'd never heard about my grandmother skiing.   I called my aunt and asked.  Oh, yes, her mother had used long skis that were probably hand-carved by the Norwegian farm hands employed by John T. MacDonald at the family farm in Delhi, NY.  My aunt recalled a photo of her mother, Amelia MacDonald, as a young woman skiing down the cow-pasture hill in Delhi, wearing a long wool skirt. Imagine that! 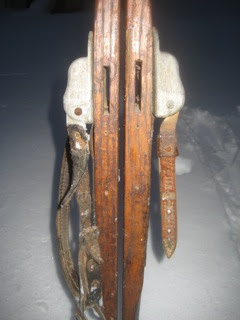 You can see in this side view that the old wooden skis have a slot for a previous style of binding.  It was probable a simple strap to tie or buckle over a boot.

My childhood skis had a similar slot.

In December 1957 I was given a "Brownie StarFlash" camera, my first camera.    The first photograph that I took was of our family posing was on the doorstep on our new home at 121 Nichols Street, Danvers:

The photo is blurry and not well centered -- not a good photo -- but it was preserved in a photo album I started at that time.
My grandfather, William S. Nichols, is on the right.   I'm so glad he was included in this photo.  He died the next year, at age 84.
The photo includes my father, mother, sister Jean and our dog Heidi.   The house was then very new (constructed in summer 1957) and lacked plantings in front.  Yew bushes were soon added. Over time they grew so large that they almost obscured those front steps, in spite of my mother's pruning.  She loved to use fresh-cut yew branches for indoor decorations, especially at Christmas time.

Here's another photo from my 1st roll of film:   my sister rolling down the slope in front of our house.

That house no longer exists.  I'm glad to report, however, that my sister and I still enjoy playing in the snow. I've just returned from a wonderful visit with her at her home in NM. We enjoyed a delightful day of skiing together.
Posted by Sandy at 9:48 PM 1 comment: