Today on Facebook I was delighted to see this image of the Prince-Osborn house in its original location on Spring Street: 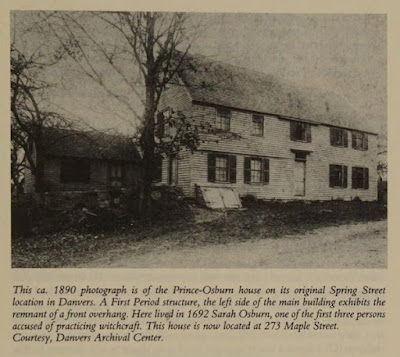 Jack Rybicki posted this photo in the Facebook group "You know you grew up in Danvers Massachusetts when......."
I'm familiar with the house in its current Maple Street location, and recall walking by it when I was young – long before I learned of its history or its relation to my own family.
Here's a story I wrote years ago about my discovery of that history:

In May 1992 my sister Jean and I flew east to visit our hometown for a ceremony commemorating the 300th anniversary of the Salem Village witchcraft tragedy. In preparation for that trip, I decided to investigate the rumor that we were descended from one of the accused witches. I didn't know the name or any details. I pulled out the genealogical papers that my mother had worked on years ago and I looked for ancestors in the Salem area in 1692. I saw a "Sarah Warren, d. in jail 1692" -- a likely prospect. Her married name was Sarah Prince. I searched in many history books about the Salem witchcraft crisis, but didn't find her name. Finally one book had an index entry for Sarah Warren, leading to a single mention that this was the maiden name of Sarah Osborne. Aha! Most of the books had long sections about Sarah Osborne (Osbourne; Osborn). She was one of the first accused and the first to die. My sister and I watched the unveiling of the Danvers Witch Trials Memorial, and saw Sarah's name at the head of the list.

A remarkable discovery (for me and my sister) is that Sarah Osborne's house still stands in Danvers. It was moved once (~1914) from Spring Street to 272 Maple Street. We had passed it on Maple Street hundreds of times, and played with the son of the family that owned it. Never did we know of the interesting history or connection to our family. Our Great Aunt May knew. Her handwriting on the back of a photo of Sarah's house tells the story. But I didn't see that photo until after I had discovered the connection for myself using books in a California library.

Sarah Osborne's land -- "the Prince land" she acquired through marriage and then the death of her first husband -- figures prominently in her story. Her sons later, after Sarah's death, fought in court against Alexander Osborne (their stepfather) to regain title to the Prince family land. I remember my mother walking with me in a small cemetery and pointing out a stone marked John Prince. She said I would have been named John Prince Nichols if I had been a boy! I don't remember hearing that we were related to the Princes. I thought she just liked the sound of that name. NOW I realize that I was walking on the Prince land and that I AM a descendant! That cemetery was near Spring Street (where Sarah's house used to stand). I grew up on another street, Nichols Street, and played often in the woods and fields between Nichols and Spring streets. I have come to realize that the wonderful 35-acre property called "Locust Lawn" was once part of the Prince land. Amazing. I grew up playing on Sarah Osborne's land and knew nothing about her. I hated history in school, and didn't pay much attention to the frequent family stories about ancestors. I doubt, however, that much was said about the unsavory parts of family history. Stories tended to be about the Holyokes, of whom my great aunts were proud.

Here's another photo posted by Jack. Its caption provides some details I had not known. (Click on image to enlarge.)

This morning's headline in the newspaper proclaims: "JUNETEENTH BILL SIGNED." This creates a new Federal holiday commemorating the end of slavery in the United States.

Tomorrow, June 19th, is the actual anniversary of the day in 1865 when news of the Emancipation Proclamation finally reached the people enslaved in Texas, bringing FREEDOM!

Growing up in Danvers, I did not hear the word "Juneteenth" nor did I hear much about slavery. I certainly didn't know the Texas part of the story, with a delay of over two years for the news of slavery's end to reach Texas. History did not interest me then. History lessons in school had bored me, with too many names of long-ago kings, distant battles, and dates to memorize – nothing that meant anything real to me. Even in college I avoided history courses, preferring to focus on math and science, music and language study. Years later, I realized my mistake. History is worth studying.

Yesterday my daughter gave a presentation as part of a series of Juneteenth events organized by the Black Heritage Trail of New Hampshire. "Finding Our Roots" was the theme. I observed the entire (online) program, and was much impressed.  I intend to catch other parts of the Juneteenth programming this weekend. See full schedule here:

My daughter and I are both reckoning with discoveries about some of our ancestors who had connections to slavery. Her presentation was titled, "Uncovering My Family’s History of Enslavement." For five years she has been researching her father's forebearers in and around Portsmouth, NH, and Kittery, Maine. Among them were ship captains who brought enslaved Africans to New Hampshire, and homeowners who owned enslaved workers. Other ancestors worked in the cotton trade or the sugar trade, accumulating wealth that was built with the labor of enslaved peoples. Seven generations in that family line were thus complicit in continuing/supporting the institution of slavery.

Meanwhile, on my side of the family I could point to anti-slavery activists, especially abolitionists in Danvers.  But... I did not know until recently that an earlier ancestor – a famous one whose portrait was proudly displayed in the Nichols homestead in Danvers – had enslaved Africans.

They were named Juba & Bilhah. They were enslaved by Rev. Edward Holyoke; they lived and worked in his home in Wadsworth Hall at Harvard, where he resided while he served as 9th President of Harvard College (1737- 1769).

I always think of my mother when I spot the first Lily-of-the-Valley flowers of the season.  She loved the scent and the appearance of these flowers. Conveniently, they tended to arrive at the time of her birthday, May 5. 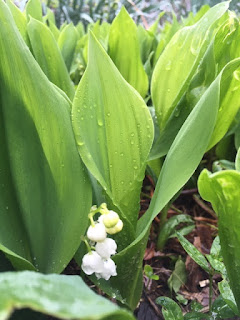 And today –right on time– I noticed this first one in our yard.  I wish she could be here to see it!

This morning I enjoyed pancakes with maple syrup – pure maple syrup bought recently at a local store. I had chosen "Dark, Robust Taste" from among the options offered for sale. I didn't see anything labeled "Grade B" – my previous favorite. All the options were marked "U.S. Grade A" but with various words added to describe the color and/or taste of the syrup. Aha! That reminded me that the standard grading system had been changed some years ago. Oops. My habit of seeking "Grade B" was out-dated and no longer helpful.

I do applaud the new system. I've always considered the darker syrup tastier. And I'd heard about the history. In colonial days, when white sugar was hard to obtain, the locally produced maple-based sugar could be a substitute. But a strongly-flavored product would not have been so highly valued as a "fancy" version with less of that maple taste.

In my opinion the old grades were upside down: A for less taste; B for more of that delicious maple-ness.

The new labeling system, which began to be implemented in 2014, is an improvement.  Here's an explanation of the changes:

"How to Make Sense of the New Maple Syrup Grades"
https://www.epicurious.com/ingredients/grade-b-maple-syrup-buying-guide-article

For history of maple sugaring in Massachusetts, visit this website:

Every spring I recall the maple syrup my mother produced and the labor that went into it. As a child I helped collect the sap.  We didn't sell the product, and didn't grade it. It was just maple syrup, a much-loved treat. For more about my mother's syrup-making, please read my March 2008 blog entry and article:  Making Maple Syrup.

This winter I've been enjoying frequent opportunities for cross-country skiing. Fresh snow invites the idea of skiing along, rather than walking along, with our dog for the usual morning outings. We head for local areas where Sparky can run off-leash while we glide on skis. Good exercise for all!

I typically wear a pair of old wool socks – comfortable ones that have served me well in the past. I pulled them from an attic trunk where they have been stored for years with miscellaneous mittens, scarves, hats and other winter gear. Memories of past camping trips and ski trips sometimes come to mind as I rummage through this collection to select a familiar pair of socks.

A different memory struck me this time: name tags!  Do you remember name tags of cloth? Did your mother sew name tags onto your clothing? Mine certainly did. And I carried on the tradition, ordering fabric name tags for myself and my children and sewing those little strips onto many, many articles of clothing that might otherwise get lost at school or camp.

I wasn't surprised to feel a name tag inside the cuff of my sock. I WAS surprised, however, to see the name on the tag: Sandra M. Nichols. I haven't used that name since I married Peter Ward in June 1965. So these comfortable old socks have been around a long, long time – outlasting that eleven-year marriage.

I recently bought a new wool hat and a new winter jacket. When I thought of labelling them, and looked into my sewing box to see if I still had any of my "Sandra N. Ward" name tags, I discovered that only a single tag remained. Maybe I should re-order? 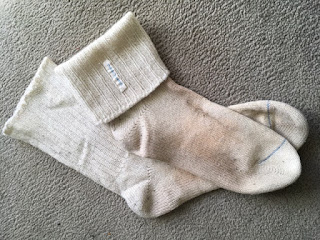 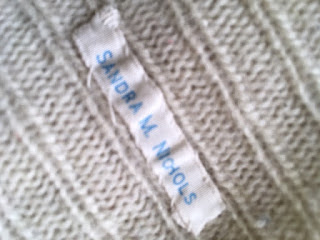 [Update, March 14: I did find options for ordering woven names tags, as well as iron-on or other styles. I chose woven, and chose a shorter version of my name this time: Sandy Ward.  They have arrived, and I've now sewn two of them onto new clothing. The tradition continues!]

This copy of an old photo of Pine Knoll was sent to me with a Christmas card years ago (1998?). I just re-discovered it this week as I thumbed through old photo albums looking for something else.

With it came a typewritten document of 4 pages, with several handwritten notes at the bottom of page 4:

"Picture probably taken by Charlie Osgood in 1917 of Florence learning to ride Aunt Oda's English bicycle on the western Avenue."

"Earl and Betty Clay assisted with copying and mailing logistics."

I assume this mailing was sent to many other Nichols relatives. I will make inquiries and see if I can learn more. I do recognize all the names in these notes, and know, sadly, that none are still living today. I wish I'd paid more attention at that time to family history and stories.

The document, written by "M. E. Nichols  January 4, 1948," is not related to this photograph, but tells much about the early history of this home, which we called "Pine Knoll," and the trees and other plants  included in the landscaping. Andrew Nichols created this homestead in 1861. M.E. Nichols is Mary Eliot Nichols, his daughter, whom I knew as my great aunt, "Aunt May."

The address of this home was 98 Preston Street, Danvers. This view is from the Preston Street side. Beyond the house was a knoll of pine trees, and beyond that, the Newburyport Turnpike. This homestead was said to be near the halfway point between Boston and Newburyport.

* For better quality image, and family photos of that era, visit:
https://sward.smugmug.com/Family/Nichols/PineKnoll/Photos-1900-1919/