This snowy image, which I just discovered in an old box of my father's slides, triggers wonderful memories of my childhood in Danvers. What a treasure to find today, on Christmas Day 2017! 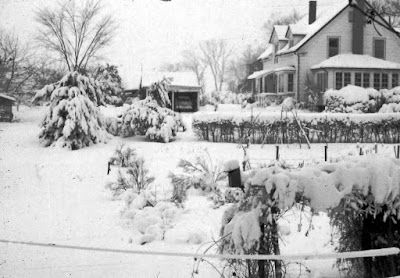 Instantly I recognize our grandparents' house, garage, and the little playhouse (on left) that Granddaddy had built for us. I see the hedge that bordered their lawn and marked the edge of a large vegetable garden that my mother and my grandfather shared. The path from our backyard ran through the archway (in foreground), across a small brook, and then alongside the garden until we passed the end of the hedge. The bushes visible on the left side of that path are blueberry bushes Granddaddy had planted. He was very proud of the large cultivated blueberries produced on those modest bushes. (My mother preferred wild blueberries that grew in abundance on tall bushes to the south of our house.)

Note the birdhouse attached to the archway. We had several such birdhouses around our yard, and enjoyed watching, in spring and summer, the comings and goings of bluebirds and wrens.

The white line across the front of the picture is a clothes line running from a large shag-bark hickory tree (out of view, left) to something (our pear tree?) on the right. Concord grapes grew on a fence to the right of that archway. So many memories! How lucky I was to grow up (for my first 14 years) with loving grandparents next door and all this space available.

Historic and geographic details:  My father, Nathan P. Nichols, took this picture looking west from our backyard at 120 Nichols Street, Danvers, where he and my mother had lived since their marriage in 1940. His father, the Rev. William Stanley Nichols, had retired to Danvers in the mid 1930's and lived in the house shown here. Its front door faced north (to the right in photo above) toward the road then called Preston Street. The address was 123 Preston Street until 1950 when that segment of Preston Street (cut off by the widening of Route 1) was renamed, and the address adjusted to 124 Nichols Street.

These houses no longer exist. An office park covers that area now. The street is still there, but under a new name: Conifer Hill Drive. You can still find Preston Street west of Route 1, and Nichols Street south of Route 95. If you look at an map and imagine the continuation of those original roads, the spot where they used to intersect is where my home was, on southwest corner of that junction. When I was 15, my family moved across the street, into a new larger house built up on the hill (northwest of the junction) and given the address 121 Nichols Street. That house has also disappeared, and the hill on which it stood has been carved down to make way for the multistory apartment buildings of Conifer Hill Commons, 121 Conifer Hill Drive.

Given all those changes, you can imagine why I am so happy to find this photographic image that matches my memories of the place. The old colored slide was terribly discolored and faded, but my husband was able to scan it and convert it to black and white, which looks much better.  I'm so glad to salvage that image and post it here to share with others. 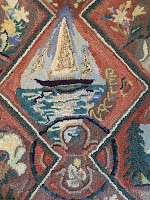 Today I received comments from a reader of my September blog posting about hooked rugs. He mentioned the sailing yacht (the "Pelican") depicted in the hooked rug made in 1958 by Sadie May Morse in Marblehead. He had lived near Miss Morse and observed her as she was hooking this rug! He was trying to recall who had owned that yacht.

The Pelican was owned by Mr. and Mrs. Stephen Phillips of Salem, friends of my parents. They frequently invited my parents to crew for them when they took cruises along the coasts of Maine, New Brunswick, and Nova Scotia.


My father was a skilled skipper and a very handy person to have on board, able to fix things and stay calm, regardless of challenges. My mother assisted not only with the sailing, but also cooking in the galley. Mrs. Phillips (Betty) loved to do the advance planning for each trip; she was a highly skilled navigator.

I heard many stories of sailing adventures on the Pelican, and excursions ashore in places new to my parents. My father took photos of white gypsum cliffs with odd shapes. My mother told of hard-shelled eggs sold in paper bags, without the need for egg cartons, because the chickens had so much gypsum in their diet. Hard eggs to crack open, she reported.

One very foggy day my mother was assigned to watch carefully for obstacles ahead. She lay on the decking at the bow, peering into the thick fog. She struggled to see anything in the fog. When a huge gray object suddenly came into view, she shouted a warning about a possible battleship ahead. When the gray gull spread wings and flew away, she felt foolish, but much relieved. Judging distances in fog is really tough!

Today, prompted by the reader's query, I decided to search through my father's slides to see if I could find any images of the real Pelican, or of Mr. and Mrs Phillips. (I recall many visits to their home, and also seeing Stephen ski in Danvers at Locust Lawn, where my father ran the rope tow.)  Look what I found!

Here's a photo that proves I was on the Pelican (wearing my white sweatshirt with blue LRY logo). My sister Jean is in green. Mr Phillips is seated to the right, and one of his daughters is at the helm. 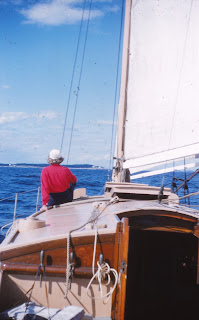 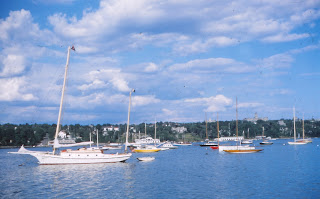 Today, on a cold rainy December day, it is a pleasure to view images of summertime sailing.
Posted by Sandy at 9:17 PM 1 comment:

Fresh snow, the first real snow of the season, covers our yard. About four inches fell yesterday and another two during the night. The eastern sky has lines of pink as this Sunday begins.

I awoke very early and spent two hours reading in bed before dawn. I'm reading the draft of the Pine Knoll story, a book of family history written by my cousin Janet Nichols Derouin as she compiled entries from old letters and family diaries.  The year is 1860...

By the fourth of December Mr. Daily was working full time on the cellar hole and North Danvers had its first snow fall of the season, four inches which came in the night, and Andrew commented the next day:  1st. sleighing of the season.  I staid in office and washed Harness with castile sope and oiled Boots in AM.

On the eighth he wrote: went skating for the 1st. time  On Mill Pond 2 hours in PM.