My April column,  Bringing tadpoles home,  is about the spring ritual of collecting pond water and tadpoles, which we also called polliwogs. 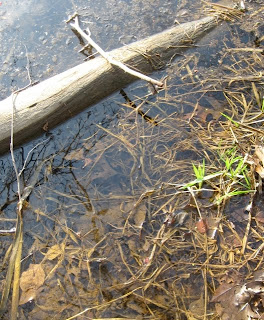 A few days after submitting this column, I happened to be driving south from Newburyport on Rte 95 and realized that I'd be going right through Danvers.  On the spur of the moment I decided to stop and investigate whether there might be tadpoles yet in our old pond or in the former ice pond on Ferncroft Road.   Here's a close-up of the edge of the Ferncroft pond, which was easily accessible from the public trail.

I scooped water and leaves into a big plastic cup and watched as the contents settled.  A tiny snail crawled up the inside of the cup.  I didn't see any tadpoles or water bugs, but enjoyed the oh-so-familiar look and smell of the pond water. 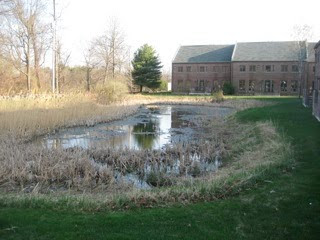 Next I drove to the pond that used to be by our little house.  Not much of the pond remains, however.  It is bordered by an office park (on Conifer Hill Drive) that replaced our house, my grandparents' house, and the fields I played in.  I took a few photos and left without venturing down to the water's edge, which looked squishy.  I didn't have boots or a change of shoes with me,  nor did I wish to risk trespassing in search of tadpoles.

My next stop (visiting a library in Cambridge) would have been awkward if my shoes were oozing pondwater!
Posted by Sandy at 1:49 AM No comments:

Today, the first Thursday of the month, is the expected time for publication of my "Remembering Danvers" column.   But this month you'll have to wait another week.  Sorry!  Both Cathryn O'Hare, Danvers Herald Editor, and I had our hands full with other projects and agreed to postpone my column.

You could re-read older columns, for example this seasonal one from 2008: High water in spring...

But some previous year links no longer worked this week, I discovered. Oops.   Cathryn assures me that the older columns are still online; she was able to view the ones I couldn't see.  The problem turned out to be the form of the link from this blog to their site.   One by one, I'll need to re-edit those older links to conform to the current practice used there.  I feel foolish that I had used a shorter address in each link.

If you encounter an error page saying "This item no longer exists," please let me know.
Thanks!    --  Sandy
Posted by Sandy at 8:27 AM No comments: