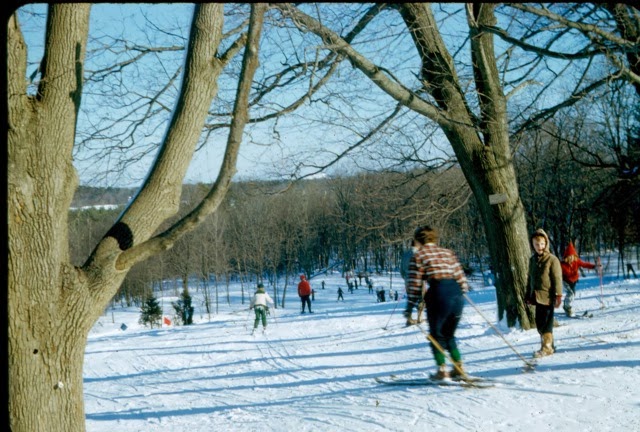 I love this 1954 photo, which captured the scene very well. The photographer (David Brewster) was standing on the flat area at the top of the slope – the place where we started each downhill run.  Last year his son Dave digitized his father's old slides and shared this with me. Such memories!

The rope tow ran along the right side of the open slope. In the photo I can see (faintly) a few bodies coming up that tow, and I know that the little figures at the bottom of the hill are approaching the rope and getting ready for the up-hill ride.  The rope tow engine was, in those days, a Model T Ford that sat in a shed at the top of the hill, behind and to the right of this photographer.

The view here is eastward, towards (unseen in the distance) Summer Street in north Danvers. On the right in the distance would be the St. John's Preparatory School property; on the left, Bishop's Meadow. By 1971, bulldozers and other large earth-movers were re-shaping this landscape, preparing to build Route I-95.

This ski slope disappeared in the construction.  In fact (I discovered today while staring at a Google map of the area) I-95 now runs right through this location, though hundreds of feet lower. Much of the hill, containing good gravel, was re-distributed elsewhere, leaving behind a valley and a much steeper slope on what was left of the old hill. That new slope dropped 300 feet, my father said. He attempted to ski there, but highway officials discouraged the practice.

What hill was this?  We called it "Locust Lawn" because of the old estate that had once been built there. Some people called it "Nichols Hill" because so many generations of our family had lived on or near it. Older maps mark it as "Dale's Hill," probably for a similar reason. Today the fragment of it that remains is called "Conifer Hill."

Update: On Thursday December 11, 2014, the Danvers Herald published my column about skiing on this hill. The online version was posted December 14. See  Remembering Danvers: When family ran local ski hill.