This photo shows a portion of the old Newburyport Turnpike (Route 1), looking north at the Preston Street intersection in the Hathorne section of Danvers. The driveway going diagonally to the left led to "Pine Knoll" – the Nichols family homestead at 98 Preston Street. This photo was taken by one of the Brewster boys, three brothers who were grew up at Pine Knoll, sons of Annie Nichols Brewster.  I frequently walked up that driveway to visit with cousins Annie and Marian, and great aunts May and Margaret Nichols. Annie was my piano teacher.

The date of this photo must be about 1951 -- just as the traffic was being re-routed in the midst of the constructions project that widened Route 1 and built a bridge and a cloverleaf system to replace the traffic lights at the intersection with Route 62 (behind the photographer, down the slope to the south).

The next photo shows the view looking south from Pine Knoll.  The traffic sign in center island says,
BOSTON
BEAR LEFT
so it seems that the right-hand side of the highway wasn't completed yet.

Note the piles of tree trunks cut from the Pine Knoll property.

Below are additional images scanned from Brewster family slides.

This seems to be an earlier photo, showing the old two-lane Route 1 and the beginning of construction beside it. View south, looking from Pine Knoll property.  Compare to next photo, which lacks the utility poles (moved? place underground?)
The next two photos show a house that had to be relocated. Whose house?  Where did it go?  My cousin Stuart Brewster responds, "This was owned by the family and was just beyond the [Pine Knoll] tennis court.  It was rented to numerous families. ... I do recall that Uncle Andrew and Aunt Bunny lived there for a time. There once was talk by Aunt Margaret that she would open a restaurant here since in those days there were few clean places to stop. It never happened. The house was re-located up the Pike at North St."


The next two photos are looking north, perhaps showing the same location after that house (and several on other side?) had been removed?

Determining the sequence of these undated photos is a challenge. I suspect that the old Route 1 pavement seen in photos 4-8 above was used for a while during the construction, and then – after the new east side of the highway was completed and in use (photo 9 above), the old roadbed was ready for re-construction, as seen in photos 10 and 11, below.

Note the cat observing the scene above.  This view is looking north towards Topsfield.

Photo 11 is looking south, probably on same day as photo 10.  Pine Knoll on the right.


These next two photos were taken a few years after the construction had been completed.  The photographer stood at the new paved driveway into Pine Knoll, looking northward, capturing a procession of antique cars on a Glidden Tour, 1954.


Note the cut-through in the median, allowing U-turns in either directions.  (That cut-through was later eliminated, for safety reasons.)  My father's new factory for UNEX Laboratories would eventually be built (1964?) on the lot at the right edge of these photos.  Later, the Berry building replaced the UNEX building there.  Many changes over the years – including of course the removal of the Hathorne School building (see my previous post) to make way for these improvements to Route 1.

My cousin Dave Brewster recently scanned and shared some old newspaper clippings, including this one of my old school being moved from its location on the Newburyport Turnpike:

I was a first-grader in that school during 1950/51, its final year. We all knew that change was coming. The school yard was reduced in size as the construction project at the intersection on Route 1 and Route 62 reshaped the landscape, adding a cloverleaf around the school.

One of my first columns for the Danvers Herald in spring 2007 described my experiences as a student in that one-room school house. You can now read a copy of that column on this blog:
First Grade at Hathorne School

Dave Brewster's on-going project of scanning old family photos and clippings has brought to my attention many images I'd never before seen. Last year he shared a series of photos of the construction along Route 1 (Newburyport Turnpike) as it was widened in 1951. It had been my intention to post some of those images in this blog, but I didn't take the time to do so.  Now, seeing this photo of my school being moved out of the way, I'm motivated to find those other photos.
Posted by Sandy at 1:00 PM No comments:

I remember waiting in line at the ice cream truck after school, trying to decide which treat to buy: a push-up? a popsicle? an ice cream sandwich?  I recall colorful popsicles with double sticks, and the way you could divide the popsicle in two to share with a friend.

One of my favorites was the ice cream sandwich, in spite of the somewhat soggy outer wafer that left chocolate-colored bits stuck to my fingers.

The ice cream truck parked strategically near the school, catching us as we came out to wait for our bus home. I lived on a small road in a rural part of Danvers – not on the route of any ice cream truck, so this school-side truck was my one chance to buy from a mobile ice cream vendor.

Here's a photo I took in 2009 when I visited the new Danvers Middle School. I was delighted to observe the preservation of familiar scenes from the past: Richmond School and an ice cream truck! Beyond the truck the windows of my 6th and 7th grade classrooms (in 1950's) are still visible. 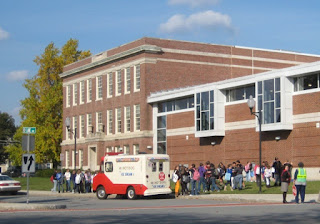 The middle school students still line up for ice cream, just as we did. 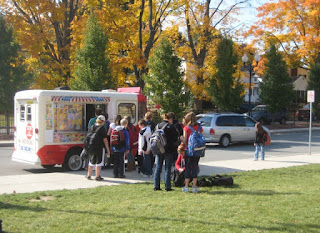 Here's a link to an interesting webpage about the origin of ice cream trucks:

"A Brief History of the Ice Cream Truck"
How a musical truck hijacked an elite dessert and delivered it to the people.


Update: On June 25 the Danvers Herald published a column I wrote titled Buying treats from an ice cream truck (posted onilne June 17, 2015).
Posted by Sandy at 11:27 AM No comments: