In my previous post, I described watching Queen Anne's Lace grow and change shapes in my yard. This sequence of photos illustrates the phases from a white Queen Anne's Lace flower cluster to a "bird's nest" shape and then to the tightly-packed seed head.


Here is a link to another woman's sketches and photos of Wild Carrot, including a recipe:  Wild Carrot/ Queen Anne's Lace (Daucus carota): A Pictorial Portrait. 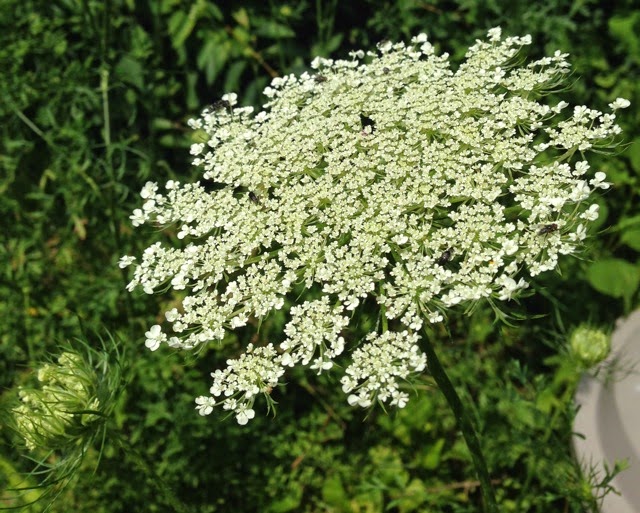 This summer I have become fascinated by Queen Anne's Lace, a common plant remembered from childhood, now growing profusely in my yard and along the edges of fields and roadways. I've always admired those flat lace-like flowers, which are really clusters of many small flowers together. They look like large horizontal snowflakes, or the white antimacassers older women crocheted and placed on the backs and arms of upholstered chairs.

All my life I've thought of those flowers clusters as flat discs, little lace doilies. This summer, with drawing pencils and my art sketchbook in hand, I looked at Queen Anne's Lace with fresh eyes. Careful observation led many interesting discoveries. The dark spot in the center is actually a single purple blossom (very deep purple, almost black). Those "flat discs" change shape on a daily basis, flexing to a hemisphere in midday sunshine, flattening again by evening as they tip sideways and then turn upside down, curving in the opposite direction at night!
How does this happen?

It is like an umbrella that can flex both up and down, without breaking.

The architecture of this plant is amazing.

Each day as I walked by the plants I'd note growth and changes. I enjoyed watching this "Dance of the Queen Anne's Lace," as I came to call it.

I noticed an interesting hierarchy. At first there was only one flower cluster open on the entire plant. Other branches had small clusters preparing to develop flowers, but only the one white disc was open.

Perhaps only one Queen Anne is allowed at a time and the others bow their heads away in deference to her? (See photo below) 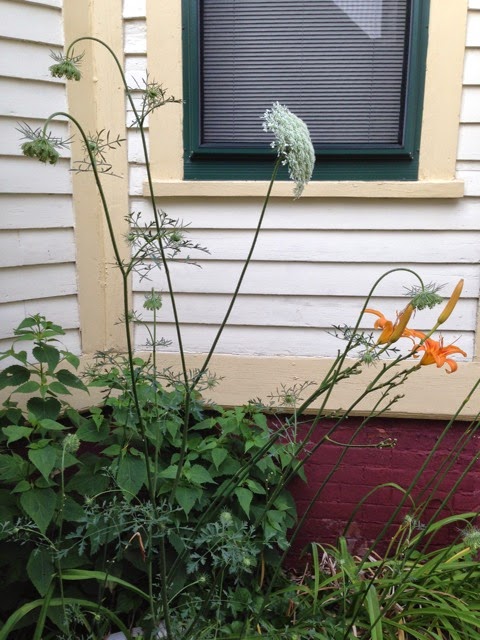 After a few days, during which many flies, bees, and other insects crawled over the cluster, the whiteness of the "Queen" faded and she began to curve upwards, forming a green cup or nest-like structure. (Some people call this plant "Bird's Nest Weed.") By the time the old queen had folded up into a "nest," secondary blossom clusters had become prominent -- one on each branch of the plant. Tertiary buds further down on those branches await their turn.

Here are some additional photos of this same plant, later: