What's in a name?  Recently I have spent much time focusing on Holyoke -- the place and the name, and my connections to Holyokes past and present. I've been looking at a mural at the Holyoke Public Library. 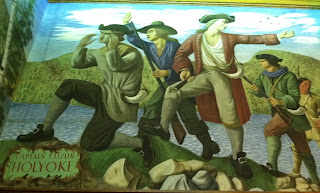 It was painted in the mid-20th century to depict exploration of the Connecticut River valley by English settlers in the 17th century. One survey team was led by Captain Elizur Holyoke. Legend has it that he named Mount Holyoke, a prominent local landmark.

Growing up in Danvers in the 1950's I often heard the name Holyoke mentioned, but I didn't know the story of Elizur. Instead, I heard about Edward Holyoke. My uncle was named Edward Holyoke Nichols after an important ancestor whose portrait hung in the parlor of the old family homestead in Danvers. As a child I had no interest in such portraits and very little curiosity about family genealogy. I just knew that my great aunts were proud of some Holyoke ancestors, especially ones named Edward.

When I attended Mount Holyoke College in the 1960's, I became acquainted with the mountain. I still didn't know anything about Elizur. In the 1990's when I returned to western Massachusetts and decided to buy a house in the city of Holyoke, my father asked, "Why Holyoke?" He wondered why the city was so named, and if there was any connection to our family. I did not think so, but took him to the Holyoke Public Library to find out. That's when we learned about Elizur Holyoke and his survey team. There did seem to be a possible connection to the Holyokes in our family, but I was too busy in those days to investigate further.

This month (December 2011) I have done additional research about Elizur's life and times and have read about the creation of this library mural. The artist (Sante Graziani) did not work from a portrait; no likeness of the real Elizur exists.  For more images of the mural, click here.

To learn about my family connection to Elizur Holyoke, read my January 2012 column, "Holyoke connections" in the Danvers Herald, or read the copy below.

The house in the Hathorne section of Danvers where my grandfather grew up was full of old things, including some portraits of ancestors named Holyoke. As a child visiting that house, I paid no attention to the dark paintings on those dark walls. I was far more interested in the kittens I could chase or the sweets my great aunts offered. I didn’t care then about family genealogy and don’t remember now the details of stories the aunts and cousins liked to tell about their forebearers. I did grasp the fact that they were quite proud of some fellows named Holyoke, especially one who was a president of Harvard long, long ago. My uncle Edward, my grandfather’s first son, was named Edward Holyoke Nichols in honor of that ancestor. Thus the name Holyoke has always been familiar to me.

Years later, in California, where I lived for 21 years raising a family, I skimmed through an inherited copy of The Holyoke Diaries, 1709-1856 (published by The Essex Institute in 1911), liked the name Susanna Holyoke Ward, and chose a similar name for my daughter. I had no idea that I would ever move back to New England.

Now I live in the City of Holyoke on the Connecticut River in western Massachusetts.  “Why is it called Holyoke?” my father asked in 1994 as I showed him the house we intended to buy in the Holyoke Highlands. “Does it have anything to do with the Holyokes in our family?”  “I don’t think so,” I replied, “they were all in eastern Massachusetts, as far as I know.”  To me, the Holyoke name was a common one in the area; I had attended Mount Holyoke College in the 1960’s and hiked to the top of Mount Holyoke, the local landmark for which it had been named (1837). I’d never considered a family connection. My father’s curiosity, though, sparked a thought.  “Let’s go to the public library and ask.”

Thus my father and I visited the Holyoke Public Library and met Mr. Paul Graves, then in charge of the Holyoke History Room. Mr. Graves helpfully pulled out old maps and old documents and introduced us to the history of Holyoke, one of the first planned industrial cities in America, with a big dam on the river, three canals and many mills. The first dam had been built by 1850. The name Holyoke, probably from the nearby mountain, was given to the planned city. The city was incorporated in 1873. Only a small village had existed before, and it went by different names (e.g., Third Parish, North Parish, or Ireland Parish of West Springfield). We learned that an early English settler named Elizur Holyoke had come to Springfield in 1640, married Mary Pynchon (daughter of the founder of Springfield), and helped survey the land in the region. Legend has it that he named that mountain.

Where did Elizur Holyoke come from?  Am I related to him? What connection, if any, does he have to those portraits that hung in Danvers? From Mr. Graves we learned that Elizur had come from Lynn and that a son (also named Elizur) had returned to eastern Massachusetts. A family connection seemed likely, but at that time I didn’t investigate further; I was too busy with my job (coincidently, at Mount Holyoke College). I hadn’t even noticed the big mural labeled “Capt. Elizur Holyoke” in the library’s central room. Now retired, and serving on the Board of the Holyoke Public Library, I have been paying much attention to that mural, which was recently removed for conservation while the building undergoes renovation. I’ve taken the time, at last, to answer my questions about Elizur.

Elizur Holyoke was my great-great-great-great-great-great-great-grandfather! That’s seven greats, or nine generations back. He was born in England, came to Lynn, MA, with his father Edward, and was 22 years old when he married Mary in Springfield. He was the grandfather of Rev. Edward Holyoke (1689-1769), who in 1737 became President of Harvard (then a school of about 100 students).  “The diary of President Holyoke, contained in sixty almanacs, was inherited by Mr. Andrew Nichols of Hathorne, Mass., …  Mr. Nichols and his sister Mary W. Nichols have been of great assistance in copying from the original… and in permitting the reproduction of family portraits.” (The Holyoke Diaries, 1911, page viii.)

This fall I have been wearing a small brown “I love Holyoke” button, as have many other residents of Holyoke. We have elected an energetic young mayor who has great visions for the City of Holyoke. My focus is mainly on the future, with excitement about the coming library expansion, computer center, train service, and other improvements in Holyoke. But I have enjoyed this excursion into the past, connecting my Danvers and Holyoke roots.

My first experience with a remotely-controlled television was startling and funny. I've written about it for this month's column, which is to be published in the Danvers Herald on December 8th:


TV Remotes and other memories.

While doing background research for this writing, I found a few relevant webpages about early TV equipment. For instance,

I also emailed my childhood friend Janet (Hoberg) Cantatore to ask what she remembered of the TV her family owned in the mid-1950's. It was bigger and fancier than any TV I had seen elsewhere, and had a remote control device, but otherwise I didn't recall much about it.

Janet and I rarely watched TV together at her house. She reminds me that her parents' rule was "no TV in the day time." She confirmed the type of TV they owned: a 1955 Zenith Flash-Matic. You can see an advertisement for it .
Posted by Sandy at 9:46 PM No comments: