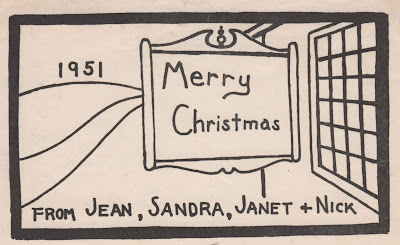 My father liked to design Christmas cards for our family, and often his design was printed on one side of a 1-cent postcard.  Here are some examples. These were saved by my cousin Janet Derouin and sent to me THIS month as a delightful surprise with her own Christmas card and letter.  Thank you Janet!   I well remember some of these, but others seem new to me. I was too young, or not paying attention to the cards my parents were sending out. 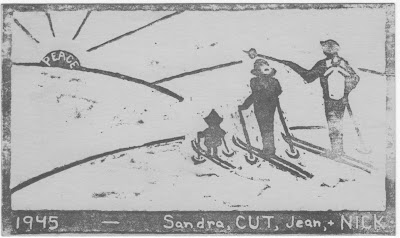 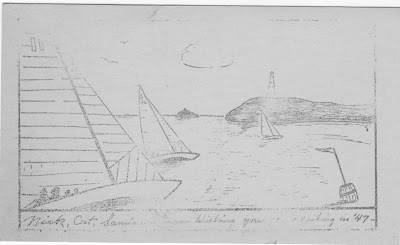 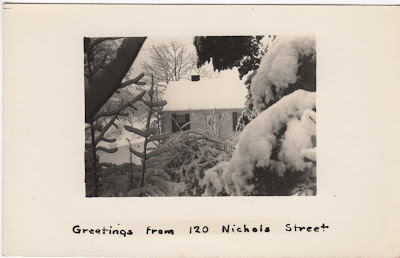 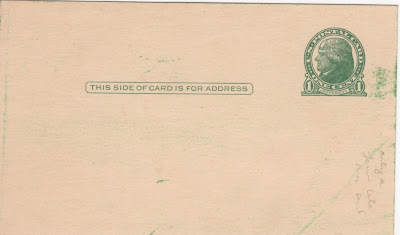 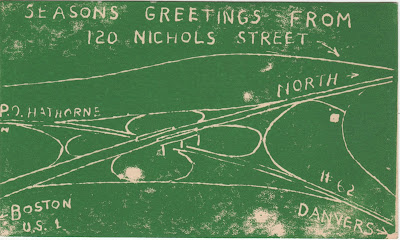 This green one with the map is a fun surprise. No date on it, but I know that the cloverleaf was constructed during my first-grade year (1949-50), so I'd guess that this might have been made for December 1950.  The little white square on the right side locates our house, 120 Nichols Street, Danvers. My father was good at sketching maps and plans. He also always printed his letters, rather than writing in cursive.

Below is another undated postcard that I have never seen.  I do recall posing for that photograph. We climbed up the ladder and stood still while various photos were taken.  Somewhere I have copies of several versions of that scene, and I knew that the purpose of the posing was for a Christmas card. But until this week I have not seen (or don't recall seeing) the finished product. Our dog Heidi is included. Getting her to pose, too, was probably a challenge; it looks like she was about to walk away.  I'm delighted to have this little card from the past. 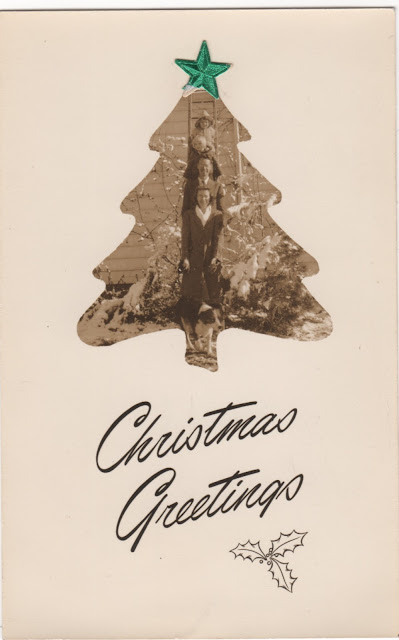 Christmas Greetings to all, and Best Wishes for a Happy New Year!

My great grandfather Andrew Nichols worked as a farmer in Danvers, at first helping his Uncle John Nichols, and then, separately, as he established his own place and built a cottage for his bride-to-be, Lizzie.  She lived in Salem, where he had met her, and he had been courting her discreetly for four years. His mother and aunt (also living in Salem) opposed the relationship, and also opposed his decision to become a farmer. He persisted, writing love-letters to Lizzie and planning a future life in rural Danvers.

My cousin Janet Nichols Derouin has written this description of their wedding:

THE FARMER TAKES A WIFE

On the evening of September the fifth, 1861, Andrew Nichols and Lizzie Stanley were married by the Stanley family's minister in the parlor of the Stanley house, 20 Andrew Street, Salem. In the city records Andrew's occupation is listed as "farmer." ... The audience was small and the event referred to by their children as "a quiet wedding."  Lizzie's gown has been described by her daughter, Mary Eliot, as being of a delicate hue, reminiscent of "Ashes of Roses." The silk it was fashioned from had the raised figure of a rose woven into the fabric and the dress was "cut with a closely fitted bodice and a voluminous skirt held out by a hooped underskirt." She also wore silk stockings and carried an elaborately embroidered handkerchief.

When the time came for the newlyweds to leave, they were driven to their new cottage in the proverbial "hired hack," provided by a Salem livery stable.

Socially speaking, Lizzie had smooth sailing when she arrived in North Danvers and her neighbors were sincere in their welcome. They had known Andrew all of his life and the people who made up a farming community had always had different standards than those who make up the "polite society" of a city.

The fact that Lizzie had grown up in a house without servants, unlike Andrew's mother and sister, not only carried no stigma but was an asset, having better prepared her to cope with the role of farmer's wife. The ability to pull her own weight, and be helpful and cordial to her neighbors, would be the true measure for acceptance in this rural community. The more prosperous farms had their "hired girl" and "hired man" but that did not mean that the farmer and his wife were ever idle.

Lizzie was well acquainted with every phase of good housekeeping. She knew how to tend a flower or kitchen garden and was a good manager, keeping neat and detailed books of the household expenditures.

Aside from her talents as a homemaker Lizzie had a very social nature and was a joiner.  She loved belonging to organizations and was a willing and enthusiastic worker. She must have cut quite a swath in the groups she joined soon after taking up residence in Danvers, with her large selection of pretty and fashionable clothes.

Practically from the day they were married Andrew and Lizzie were entertaining or being entertained and it would be putting it mildly to say they were a very popular couple. Lizzie really was the perfect help-mate for Andrew.


This is the beginning of "Pine Knoll" – as Andrew called their new home at the corner of Preston and Newberry Streets in the Hathorne section of Danvers.  For more information about "The Pine Knoll Story" see  pineknoll.nonotuck.us/wp/