Do you remember where you were when men first walked on the moon? I was in Danvers sitting on my parents' couch in the living room, watching the TV intently. 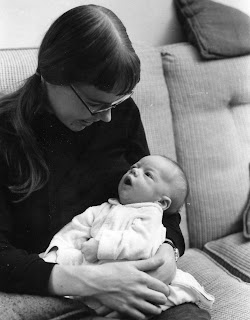 My infant son was on my lap. I wondered then what he and his generation would think about men walking on the moon -- so exciting and historic for us, but perhaps to become routine for him. He slept or nursed through most of the adventure. He was only 6 weeks old!

Today on my computer I have just watched a 40th anniversary repeat of the countdown to the launch of Apollo 11. Walking on the moon hasn't become routine, but having powerful computers in our homes and being able to watch videos at any time has become routine. Apollo 11 videos:
Will we return to the moon? See Paul Mailloux's recent column New rockets for space exploration.
Posted by Sandy at 9:17 AM No comments:

Fourth of July and tennis

My cousin Stuart Brewster, who lived at the "Pine Knoll" family homestead from 1928 to 1959, sent this email:

"Well, here it is the Fourth of July once again. You were not around when we had fireworks all day long at Pine Knoll interspersed with family tennis matches. Your Dad and my brother Dudley were by far the top players. The double matches were especially exciting. Just about everyone played. All that ended in 1950 when the state took half of the court for widening the Turnpike. And they had the gaul to only offer payment for the half that they took by eminent domain. What good is half a court?" ...

"The problem with the tennis court was its up keep.
It was made of clay and had to be rolled frequently to keep it flat. It was also prone to weeds that had to be removed. And finally the lines were made out of white lime that had to be applied. It took days to get ready and then repair after the day of activity. But it was fun."

Stuart lives in Palo Alto, California, where he and Renate raised two daughters. He often visits Danvers and Salem, where his brother David and family still live.
Posted by Sandy at 10:12 AM No comments: