This week I discovered a document that helps me understand changes made to "Pine Knoll," the old Nichols homestead at 98 Preston Street in Danvers. I've long known that the Pine Knoll home was started as a cottage in 1861, and significantly expanded in 1880. I often visited in the 1940's-1960's, but never had any sense of which parts of the house were original, and which rooms were added later. To my young eyes, it all looked old, very very old, and unchanging. It seemed a sort of museum, unchangeable, though cousins and great aunts were living there.

Now I have a composition by one of those aunts, Mary Eliot Nichols, also known as "Aunt May," recalling the changes she witnessed in HER childhood. She was 12 years old when the house was extended. She lists all eight children born in that house; seven of whom were still alive in 1880, and lived there for many more years. (Aunt May and her younger sister Margaret were still living there in the 1960's!)  The house expansion was financed by funds inherited after the death of a grandmother, and required in part by the need to provide housing for an unmarried aunt (who also contributed inherited funds and property to Pine Knoll).

Aunt May's composition was later typed by another relative, who added sketches to show the layout of the house before and after the great remodeling of 1880. Unfortunately I do not know the date of her composition, nor the date of this typed version. Nor do I know the accuracy of the sketches, though the drawings on the left side (first-floor rooms) make sense to me, matching my memories.


I am not the first person to consider Pine Knoll a museum, nor to comment about the blending of old and new sections. A visitor in 1881, soon after the expansion of the house, titled his report "Nichols Museum" (published in the Danvers Mirror, May 7, 1881). He wrote, "we made a call at the cottage among the pines at the corner of Newbury and Preston streets, occupied by our friend Andrew Nichols, the civil engineer, who when asked last fall what he was doing to his house? replied that, he was building on an ell, as he found after nearly twenty years' trial that his house was too small for the wants of his family, --now consisting of ten persons."

"Over the wide doors to the spacious parlor hangs a coat-of-arms of the Appleton family of Ipswich, made by Margaret Appleton, a great-great-grandmother of its present owner. Upon the walls of this room hang the portraits of seven generations. All the furniture of this room, with one or two exceptions, has been doing good service for a long time in the family."

"Mr. Nichols has made many plans of houses built by others, and made all the plans and attended to the construction of this “house of seven gables;” and as he wished to have a house unlike any other, we think that he has accomplished his object, and so well is the old and new blended that it is hard to tell where old and new unite."

"The outside is shingled with fancy sawed shingles (done by his boys in their summer vacation) down to the second floor, then clapboarded. Nathan T. Putnam did the carpenter work, H. McGaughlin the stone, Frank Flint the brick, Charles F. Aiken the plastering, Sylvester Trask the painting, George H. Little of Peabody the steam piping, and Caskin & O'Connell the plumbing."

Among family papers inherited from the estate of her father (my great-grandfather) Andrew Nichols of Danvers,  I have found a box of photographs of her classmates – 33 photographic portraits by A. O. Elwell of Danvers.

Her photograph was not in that box. In another file I found two copies of her photograph, also by A. O. Elwell, in the same style, but now in very poor condition.  One is torn, the other marred by foxing.

I wrote to Mr. Richard Trask, Danvers Archival Center, to ask if the Archive already contains copies of these graduation photographs. He replied that the Archive has such photographs, but only seven for the Class of 1898. Fortunately one of those, in excellent condition, is of Margaret Nichols. He scanned that image for me and I am posting it here:


I am thankful to have this much clearer image of my great aunt Margaret.  I remember her well, though only when she was much older.  It is fun to catch a glimpse of her younger self.

Here is one example: 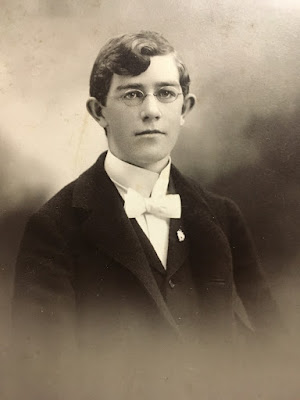 
Most of the students are identifiable by the names handwritten (signed?) on the back. As I compare the various cards, I see that the handwritings vary, and do look like signatures written in ink.

The supplementary notes are all in pencil, in a consistent hand (probably by Margaret).


It is my intention to donate the box of 33 photographs to the Danvers Archival Center, to join the seven there. Hopefully that will make a complete set, or close to it.

Only one card lacks identification. I'll post her photo below. Perhaps someone who views this blog will be able to recognize this student and provide her name.

Mr. Trask reports that 41 students graduated in 1898, according to the annual report shown here. And now we can see a list of all the names, and the courses of study they completed. Thank you Mr. Trask!