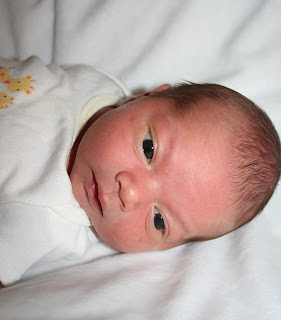 A new member of our family has been given the middle name Nathan in honor of my father, Nathan P. Nichols.

This is my new grandson, Alec Nathan Singer, at the age of 4 days. I am currently with him and his family in California.

I hope someday to tell Alec Nathan about his wonderful great-grandfather. In the meantime, I'm writing the stories down.
Posted by Sandy at 1:38 AM No comments:

My column about High Voltage Nick was published yesterday in the Danvers Herald, print and online.

I remember my father's clear and confident voice as he announced himself on the air waves, "This is W 1 High Voltage Nick." Daddy loved to talk on his Ham radio. He used a hand-held transmitter with a button on it and a long curly cord looping down to the box under the dashboard of his station wagon. He'd  hold the device near his mouth, press the button, and talk into it. "Calling CQ CQ CQ."

He probably also had radio equipment in the house, but my strongest memories are of the mobile unit. I watched and listened while riding beside him in the car. It sounded like "seek you, seek you, seek you." That is exactly what he was doing, seeking out someone in the invisible radio-land who might want to talk with him at that moment. "Calling CQ and waiting for a call."

It was a game with a language of its own, which I barely understood. But the patter of it became familiar, the sing-song repetition of cryptic phrases that composed a conversation between Hams, the amateur radio operators.  "K Please." "Over."

How many callers could he find? How far away were they? How well was his radio working? "Thanks for the call."  "So how do you copy?" As an electrical engineer, Nick liked tinkering with and improving his equipment. Could he get a good signal from a far-distant location?  One day he was excited that he had reached someone in Russia, another day Germany.  He had a collection of postcards displaying call signs from other Ham operators, evidence of long-distance connections made.

Much of the activity, however, was local. He volunteered regularly for Civil Defense exercises in Danvers. I heard many stories of the Monday nights practices. Hidden transmitter hunts were his favorites, judging by the twinkle in his eye as he told of the adventures. One ham would hide his car and transmit signals while the others tried – using the radio transmissions – to locate him. Nick often won these hide-and-seek contests, especially when it was his turn to hide. You might think it hard to hide a whole station wagon, especially one transmitting radio signals and required to be within the boundaries of Danvers. Not so. Nick enjoyed selecting clever locations. The huge gravel pit north of our hill worked well (blocking signals on south side), as did a spit of land in Danversport accessible only from Peabody, but with strong signals directly across the river in Danvers. High Voltage Nick was actively transmitting, but could not be found within the allotted time. He relished telling these tales.