This summer I sorted through boxes of old letters, mostly from my mother. Some were very old, before my time, before she married my father and came to Danvers. Some were from Danvers (actually, Hathorne, the address we always used for postal service). A batch from the 1960's were written to me while I was away at college or off on a summer job. 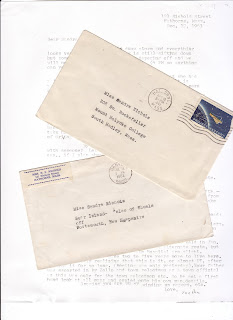 I'm struck by the frequency of letters --sometimes several in one week-- and the evidence of excellent postal service.   The postmark on the lower envelope pictured here, for example, confirms that my mother did post the letter as she intended when she wrote inside,

"I'll take this letter via horseback down to the corner store mailbox and hope it gets to you on Monday."

I don't have proof that I really received that letter on Monday, especially since I was working on an island 10 miles off the coast of New Hampshire, dependent on one boat a day bringing mail and supplies.  But it's clear that my mother and I sometime exchanged two or more letters in a week, so 1-day service was what we took for granted in those days.

You can read the published version of this post at My mother's letters and the Postal Service (Danvers Herald, September 2, 2010).
Posted by Sandy at 11:34 AM 2 comments: