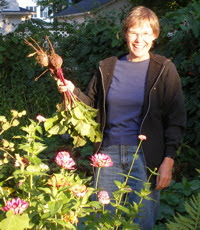 Today I harvested four big beets from the little garden I had started in July. They were delicious! I cooked both the beet greens and the beetroots. We enjoyed both. The beetroots were especially tender and sweet. Yum! (And I'm not much of a beet eater; I had planted these for Ken, who loves beets.)

As you can see in today's photo, my zinnias are blooming well. They seem much bigger, brighter, and taller than the ones I remember growing in my childhood garden in Danvers.
Posted by Sandy at 10:34 PM No comments:

I experienced a series of hurricanes in the mid-fifties and have written about them in this month's column, which was published in the Danvers Herald September 6, 2007. See "Hurricanes in my childhood," below.

I also experienced Hurricane Betsy in September 1961. It hit New England on the day my mother drove me to college for orientation -- quite a dramatic start to my college years.

I hope no hurricanes hit Danvers this year.


Hurricanes in my childhood
By Sandy Nichols Ward

A series of hurricanes hit Danvers in the fifties: Carol and Edna in 1954, Connie and Diane only five days apart in 1955. I even experienced the “eye” of one hurricane, a brief calm period, beautiful and sunny, between the two halves of the hurricane. After the eye passed, the furious storm blew in the opposite direction, toppling trees that had withstood the first winds. Exciting! There were scary moments and close calls, as when the top of a falling tree brushed one of our windows. The scariest part was my mother’s anxiety when my father was away, especially if he had gone to Marblehead to race his sailboat. He loved to sail and was seldom deterred by threats of bad weather, so my mother had reason to fret. Fortunately the races were cancelled in severe storms, and he came home safely each time.

The tension and fear during the hurricanes, when all was dark and crashing, gave way to pleasure and excitement as we were released from the house and could begin to explore the changed landscape. I remember the fresh clear air after each hurricane passed and the special smells of freshly splintered wood and upturned earth. Many of the leaves were upside-down, exposing lighter shades of green. I was young enough to enjoy the havoc caused by these storms and to avoid doing much cleanup work.

The changes were often dramatic in the wooded area where we lived. Each hurricane blew down many tall trees. Some fell across Nichols Street in front of our house, creating a green jungle where once there had been a roadway. Broken branches were strewn everywhere. Our normal routines were interrupted and we could play in these jungles for a while – until the adults got busy with saws and axes. Fortunately the adults only bothered to clear the trees from the roadway and front yard. Other downed trees were left as is for days, weeks, or longer. In the expanse of woods and fields across the street, fallen trees remained where they fell.

A huge elm fell over intact, roots and all, creating a wonderful playground. A large section of grass-covered soil was pulled up high and now draped like a thick blanket over the tree roots. We climbed on top of this mound and played “King of the Mountain.” The tall grass hung down like long hair and as it dried provided a nice slippery surface for sliding. Several children could slide down this broad surface at one time. Fun! We could also explore under the grassy slope, walking into an earthy cave with little roots sticking out of its ceiling and walls. Friends gathered in this newly created clubhouse. As time passed, the moist soil dried and the clubhouse became dusty and constricted as the overhanging blanket began to collapse. All the climbing and sliding on the ‘roof’ hastened the deterioration of the structure, of course. Eventually some ‘windows’ opened, the slope was no longer slide-able, and much of the soil fell from the overhanging roots. But the huge trunk of the elm tree lay sideways there for years of climbing pleasure.

One hurricane brought a large hickory tree crashing down on top of our garage. We didn’t have a regular garage, just a old Army-surplus tent my father had acquired. It was big enough for two cars, one on either side of the tall wooden poles that held up the peak of the tent. The hickory tree fell diagonally across the tent, flattening it. Only one car happened to be parked there at the time. Peering in under the canvas, we could just barely see the old car’s tires, squashed completely flat. We assumed the car was totaled. Days passed before anyone attempted to remove that tree. When the tree truck was finally sawed into sections and each heavy section removed, that old car – a 1932 Model AB Ford sedan -- stood there looking fine! The tires had rebounded. A small dent on one side of the roof was the only visible scar. Amazing! The hurricanes in my childhood provided much entertainment and diversion.
Posted by Sandy at 7:47 AM 1 comment: