My cousin Stuart Brewster informed me this week that there used to be a family tradition of going to Tuckerman's for April 19th (the Patriot's Day holiday). Stuart and his brothers, David and Dudley, and my father, Nick Nichols, would go there for spring skiing.

I was unaware of the April 19th tradition, but did often hear my parents speak of hiking and climbing up Tuckerman's Ravine, and then skiing down. They and their college outing-club friends loved to reminisce about their adventures at Tuckerman's.

Here's a link to a trail map of Tuckerman's Ravine, which is on the side of Mount Washington in NH.   You can see the ski routes here.   An impressive place!

I particularly recall the story telling about a famous incident in the late 1930's. As spectators on the sidelines of a ski race, they were startled by a sudden blur in the air in front of them. A skier had gone STRAIGHT OFF THE HEADWALL, sailing out into the air, rather than making the expected turn down a trail.   Astonishing! And the skier lived to tell the tale.  Even just skiing on the slope of the headwall is challenging. See Tuckerman photos and history on the New England Ski Museum website.

Today I found a review of Over the Headwall: a Short History of Skiing at Tuckerman Ravine. I was pleased to find evidence there confirming what I had heard from my parents:  in 1939 a young Austrian named Toni Matt became the first to schuss the headwall in a competition. Searching Toni's name, I found a report in his own words of how he beat Dick Durrance in that race, cutting in half the previous record time for that Inferno race.

I think both of my parents witnessed Toni Matt's feat in Tuckerman's Ravine that day, but they weren't yet married and may not have been aware of each other that day. Perhaps my father was with the "Brewster boys" (his cousins) or with college friends. I'll have to ask Stuart more about the trips to Tuckermans.
Posted by Sandy at 4:20 PM No comments:

This weekend I attended the NEFFA Festival, also known as the New England Folk Festival.  I love the music, the dancing, and the many friends I see there each year.  In the early 1990's when I moved back to New England, attending NEFFA became a spring ritual.

I've often wondered whether my parents attended NEFFA. They loved to square dance, and very possibly may have attended square dances at NEFFA.  I don't recall any mention of "Neffa" during my childhood, but perhaps the acronym N.E.F.F.A. for the New England Folk Festival Association wasn't used as a word back then.  I do recall frequent mention of favorite square dance callers  (e.g., Ralph Page, Ted Sannella) and musicians (Joe Perkins and his orchestra). The names Angie Taylor, Connie Taylor, and Marianne Taylor were also mentioned.  In the 1960's I attended a few dance classes taught by Marianne.

On Saturday I met Nancy Lob and discovered that she had attended the same square dances in Salem that I had attended as a child.  Her husband Walter Lob --another name I recognize-- played fiddle for Ralph Page for 20 years. I told her I recalled seeing a photo* of her husband.  Nancy said he's now 92 and playing viola weekly in a chamber music group.

When I mentioned my parents as "Nick and Cut Nichols," she instantly recognized the names.  "You are the daughter of Nick and Cut Nichols?!?" she exclaimed with much excitement.    She immediately introduced me to Angela Taylor, who was sitting at a nearby vending table, selling hand-sewn items. 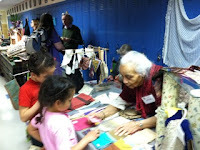 Meeting Angie was quite a treat. She is a member of the 2011 Festival Committee, and has helped with every Festival for 67 years!   Angie definitely recognized my parents' nicknames. She didn't know if they had attended NEFFA festivals, but knew them.  As we talked, some of Angie's family stopped by.  I have known and danced with her nieces and some of her grandnieces and nephews, but had not met the legendary Angie until now.  For more about Angela Taylor and her history with NEFFA, read this 2002 newsletter article (pdf): Lifetime award to Angela Taylor

NEFFA history:
"The History of the New England Folk Festival 1944-1994" published by NEFFA during for its 50th Anniversary Festival.   See  text online.

*Looking for the photo of Walter, I discovered that I had already posted it in this blog last year, when I wrote about music lessons.
Posted by Sandy at 6:03 PM 2 comments:

Ditch-digging and maintenance of water channels was a springtime ritual in our family. Our house happened to be situated between a underground spring (above) and a pond (below). In addition, surface run-off water from the hillside and dirt road above flowed down across Nichols Street towards our yard, adding to the moisture problem. Thus, we did what we could to divert the flow of water.

This month I have written about our efforts with roadside ditches.  See Remembering Danvers (April). April was a wet time of year.

Regardless of the success of our ditches, some water was always seeping into our cellar. The underground spring was probably to blame. Even adding water-proof paint didn't help. The pressure of the water in the soil below the cellar floor was enough to push up and crack the painted cement. Water bubbled in along that crack, making a slight "singing" sound.  Stepping on the floor changed the music of the sound!

I remember watching Mommy do the laundry down there by the stone sinks. She wore big rubber boots and often stood in several inches of water as she manipulated the sheets and towels through that old wringer attached to the washing machine. Then she'd haul the basket of clean damp laundry outside into the sunshine and hang it with clothespins on the laundry lines down by the pond. In the spring boots were required there, too, because the pond water flooded the laundry yard.  Water was everywhere!
Posted by Sandy at 2:57 PM No comments: