This winter while writing about my father's business and skiing, I also sorted through old boxes of papers and photographs. I have now created an album of photos of my father -- too many to post in this blog. This has been fun, and I hope you enjoy the results.
Posted by Sandy at 9:25 AM No comments:

My father was clever at constructing ski tows. According to an old (1939?) newspaper clipping, he and his friend Karl Struss built a portable tow that could be taken wherever snow conditions were favorable. "Calling themselves the Hub Portable Ski Tow, 'Nick' and his partner have considered their first season...a success and have enjoyed business amounting to well over a hundred skiers a day. They have operated in Bristol, N.H., Newton and Reading, and have received very favorable comment by several leading sports writers and columnists in Boston papers. A picture of their tow in operation at the Braeburn country club, Newton, their latest resting place, was featured in the Christian Science Monitor of Feb 2." [1939]   See scanned image of the photo my father sent me (in 1988) along with the old article, which might be from the Boston Herald or the Danvers Herald.

In Danvers, I remember a portable ski tow engine mounted onto a toboggan. My father would bring it down through the Locust Lawn woods to a steep, short hill we called "Cranmore" (located just east of "Grandmother's Rock"). He would tie the toboggan securely to a tree at the top of the slope, then unwind the ropetow and attach its pulley to a tree at the bottom of the hill. As I recall, the tow gave me a FAST ride up the hill, but for an average adult, the engine slowed down. When a heavy-set person needed a lift, my father would assist the engine by grabbing the return rope and skiing DOWN as the other person came up!

For the Locust Lawn Ski Club, the ski tows were fixed in place. First there was a Model T Ford running the tow for the big open slope. A second tow was built to serve the trails down through the woods. Our old 1950 Buick was parked in the woods and used to pull that longer rope. Some years later an electric motor replaced the Model T. My father called it his "electric pogo stick" because it was mounted high on a pole. 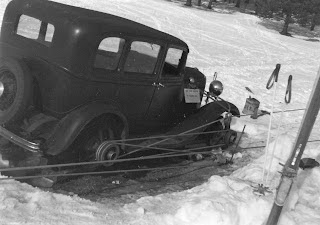 In 1996 John Nutter, a family friend, gave me this photograph of our old car "Oswald" being used as a ski tow in early 1940's. I had never heard of that! John said that he and Nick had promised in advance to bring the portable ski tow to Russell's in N.H. for a specific date, assuming that there would be no snow (thus no need for the tow) in Massachusetts. But good snow came; they didn't want to move the tow. Instead, they drove Oswald to N.H. and temporarily converted it (installed and running in 3 days) into a tow! See my previous writings about this car: Oswald in 1961 and An old family care named "Oswald" (June 7, 2007 column in Danvers Herald).
Posted by Sandy at 12:48 PM No comments:

In this month's column I wrote about learning to ski at Locust Lawn. It was published in the Danvers Herald February 7, 2008 with a photo of my father holding me in his arms as he skied down the slope. 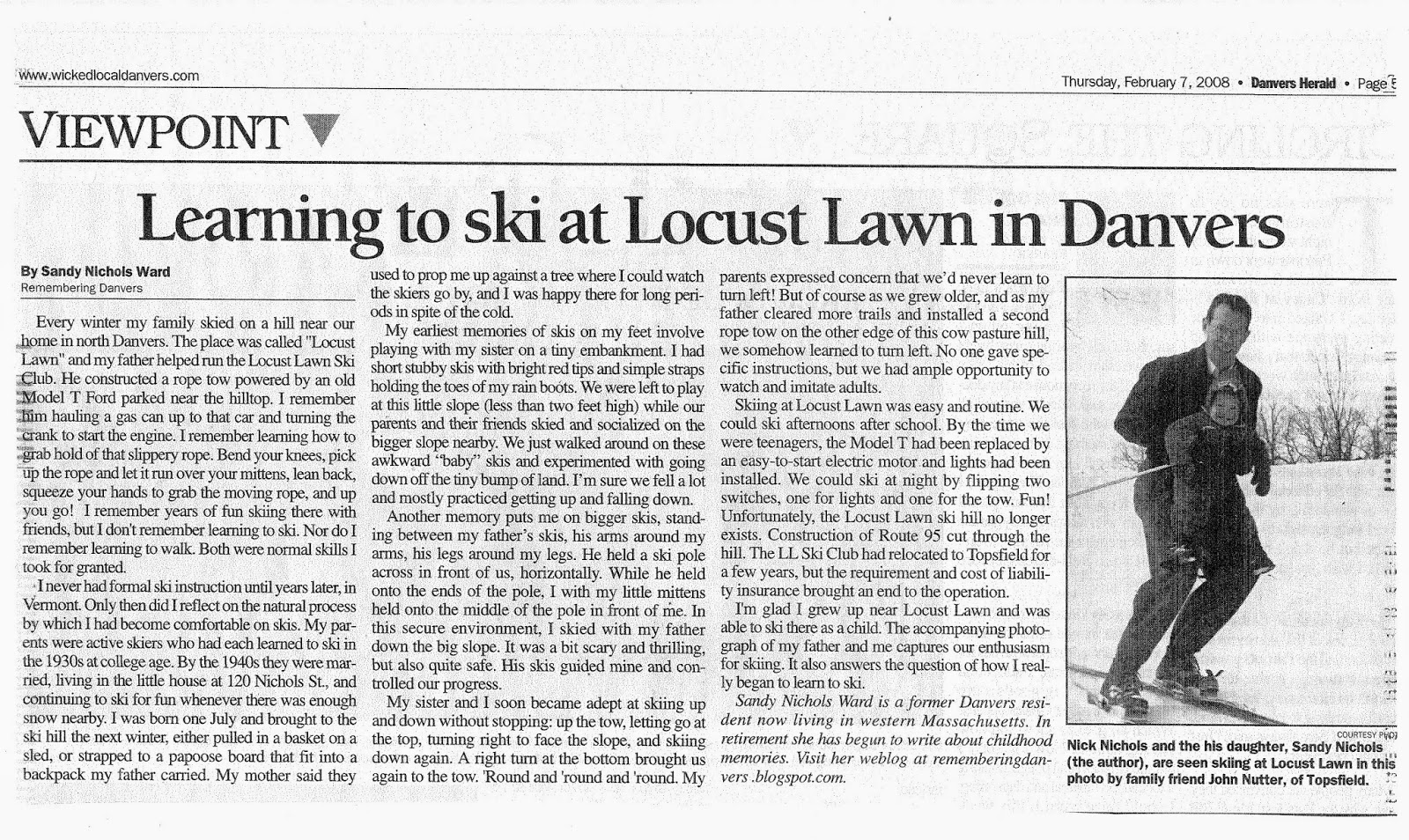 Or, for another look at the photo, see another version of this piece posted on this website:  http://www.nonotuck.us/sandy/learning_to_ski.html

In 2002 I created a webpage about skiing at Locust Lawn and sent a note to have it included in the inventory of the New England Lost Ski Areas Project (see NELSAP website).

I've also written an essay called Free Skiing, remembering the work we did to prepare for this no-cost skiing at Locust Lawn.
Posted by Sandy at 9:25 PM No comments: 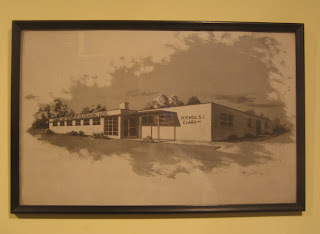 Here is a drawing of the "new" Nichols and Clark factory on Route 1.
Posted by Sandy at 9:14 PM No comments: 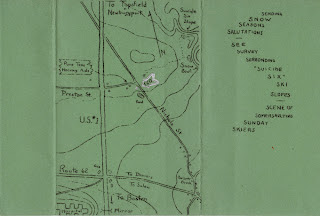 [CLICK on image for a larger version.]
My father drew this map, probably in the late 1930's or early 1940's. It shows the location of our home ("120" on silver arrow) and his business (then called "Pure Tone Hearing Aids"). It also shows the contours of the nearby hill where he and friends were developing ski trails called "Suicide Six."
This is before the creation of the "Locust Lawn Ski Club," and before the widening of Route 1.
This 3-fold card was probably used as a Christmas card or an invitation mailed to skiing friends.
Here are more views of it: 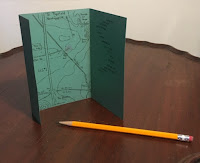 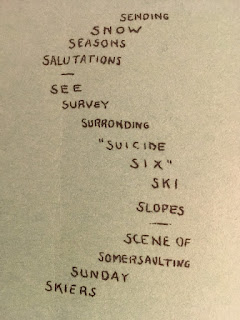