Among family papers I found an old scrap of paper, ripped and scribbled on. Why was it saved? 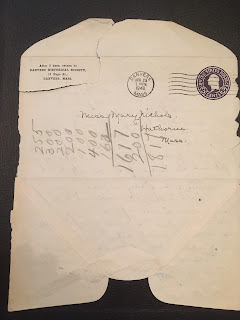 On the other side Aunt May (my great aunt Mary Eliot Nichols) had written a poignant note, which I think you can read if you click on the photograph below to enlarge the image.

That was 70 years ago today. Aunt May lived another 18 years, until 1966.  I wonder if she really did stop driving after that day in 1948.  I remember her well, and usually saw her at the old family house at 98 Preston Street  ("Pine Knoll") where she lived. I have no memories of riding in a car with her, nor do I recall seeing her drive, but I know she was an independent woman with many connections in the community. She may have recovered her confidence and continued driving for another decade. That's my guess.

I have many memories of Aunt May's earlier car, a 1932 Ford sedan that she gave to my parents in 1940. They named it "Oswald" and kept it for decades. I learned to drive, practicing with Oswald. My father said that if I could drive Oswald, I could drive anything. Oswald even became the "get-away" car at my 1965 wedding. My sister decorated it creatively, with an old stove pipe and many painted slogans (Alaska or Bust!"  "WestWARD Ho!"  "Just Married").  No, I didn't drive it to Alaska; Oswald was no longer registered, so we could only drive on private property, down through the back avenue of Locust Lawn, through the woods to the home of cousin Betty Nichols Clay, where another car had been hidden in advance.  This photo of the decorated 1932 Ford (Model AB) was taken at the Clay's: 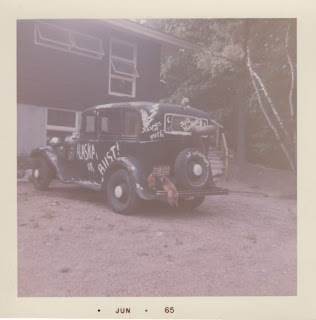 
The clear song of the White-Throated Sparrow pulls me back in time, reminding me of my mother. She could whistle a good imitation of that bird's song, and enjoyed doing so.

For photos and sound samples, visit the Cornell Lab of Ornithology's All About Birds site:
https://www.allaboutbirds.org/guide/White-throated_Sparrow/id
The songs are described as thin whistles that last about 4 seconds, and usually go up or down in pitch on the second or third note.

I smile as I think fondly of my mother.  May 5th is the anniversary of her birthday, so I am especially happy to hear the White-Throated Sparrow right now.