A photo of Oswald 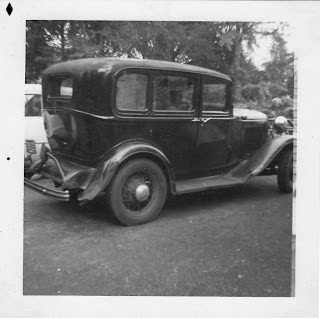 Here's a photo of the old car mentioned in this month's column. The caption in my photo album reads, "Oswald. 1932 Model AB Ford. Brought out after 6 yrs. storage for my driving lessons." I took this photo in 1961.
Posted by Sandy at 3:48 PM No comments:

All through my childhood we had an old car named "Oswald." It was a 1932 Model AB Ford that had been given to my parents in 1940 as a wedding gift from Aunt May, the original owner. There are many stories about Oswald. Recently I have written about an incident involving Oswald in the late 1940's: "An old car in Danvers Square" [published June 7, 2007, in the Danvers Herald; see previous post.]

My parents continued to drive Oswald for many years. It was registered up through 1955, and then sat in a barn with its 1955 Massachusetts license plates for additional years. In the early 1960's I practiced driving Oswald in a cow pasture. My father said that if I could learn to drive Oswald, I could drive anything!

In the late 1960's, when the barn was about to be demolished, the fate of Oswald was uncertain. I wanted to save Oswald, and thought I could use it as a second car in Rockland County, New York, where my husband and I were then living. My father loaded the old car onto a trailer and hauled it to NY for me. (He said it only fell off once.) My husband did some repair work and then we tried in 1969 to register the car in NY, but could never get the required paperwork. The Commonwealth of Massachusetts had not retained records as far back as 1955, so there was no official proof that this car existed! Ridiculous! It had been in the family since 1932! A wonderful old car.
Posted by Sandy at 11:06 PM 3 comments:

An Old Car in Danvers Square

My sister and I often accompanied our mother as she shopped in downtown Danvers. Going to Danvers Square for banking errands and shopping was usually routine and uneventful, but on one day we had a scary adventure. I remember many details about the scene, where we parked, and what happened next.

We were active girls of preschool ages. We were waiting for Mommy to finish her errands.  She had left us in the car, which was parked on the east side of Maple Street, facing directly in towards the store where she was shopping. My sister was in the front seat and I, two years older, was in the back seat. We were bored and restless. The dashboard of that old Ford had many knobs and buttons sticking out. My little sister pulled one of the knobs on the dashboard, and the car suddenly lurched into motion! The car backed up in a straight line, right out into the traffic of Danvers Square. I dove over the back of the front seats, pushed that knob back in, and the car stopped. There we sat, in the middle of Danvers Square, straddling the center line, while traffic swerved around us on both sides.  We were astonished at what we had done, and worried about how Mommy would react. Quite a predicament!

By the time she saw us, she was very relieved and thankful, after the initial shock of finding an empty parking space where her car and children should have been. No harm came to us, either from the sudden backward motion or from parental disapproval. The event became an anecdote in family history.  I remember the embarrassment and laughter that followed over the years as my mother re-told the story of our adventure in Danvers Square.

We never understood how it happened. My mother had not left the car engine running.  What knob had been pulled? Was it a throttle or choke? That old car was a 1932 Ford, Model AB (transitional between Model A and Model B, my father said). It had been passed to my parents by a great aunt.  We often heard the story of Aunt May’s refusal to trade this car in towards the purchase of a new one because the dealer, in 1940, offered her only $18. She considered the car worth far more, so retained it and gave to my parents as a wedding gift. My parents named it “Oswald” and kept it for years as their second car, useful for local errands. This adventure happened in the late 1940’s.

Today we cringe at the idea of leaving children alone in cars.  But at the time we felt relatively safe.  Perhaps we were safer in the car than when we accompanied Mommy into the shoe store, where we loved to play on the fluoroscope, watching X-ray images of our foot bones as we wiggled our toes!  Danvers Square seemed a calm, modern and safe place in those days, unlike the Danvers Square described by my father in his stories of the “good ol’ days” of his youth.  He and his friends tied small rockets to the rails during crowded 4th of July celebrations,  I’ve been told. He somehow survived his youth, and we survived ours, and life has gone on.


I could tell many more Oswald stories (and probably will in future columns).  The car was notorious for its quirks, among them a reluctance to back up. “Oswald doesn’t like to back up,” my parents would say. But on that day, it had backed up much too easily!
Posted by Sandy at 9:29 PM No comments: