I've just returned from a visit with my sister Jean at her home in New Mexico, where we celebrated her birthday. In the pile of mail that accumulated during my absence, I found an invitation for the 50th Class Reunion of the Holten High Class of 1961! I look forward to attending this reunion, which, coincidently, will be happening on my birthday weekend, July 8-10, this summer.

For this month's column I've written about my memories of having birthdays in the summer. 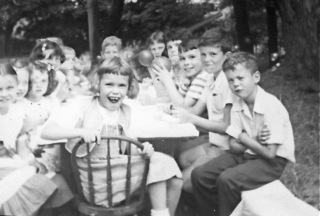 Here I am at a July birthday party long ago. Ray Dirks is at my right... Janet Hoberg is at the end of the bench on the right side.  I can see my sister Jean's blond bangs, 5th or 6th? girl on the left.


Can YOU identify any of the other faces?
Here is another photo of the same party, as we were acting out for the camera: 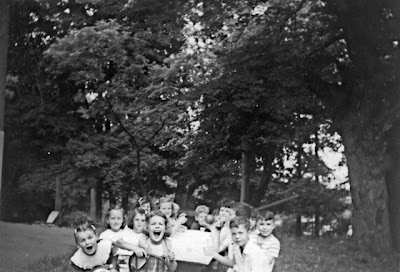 I have fond memories of this barn, which was located on the Locust Lawn property not far from our home. 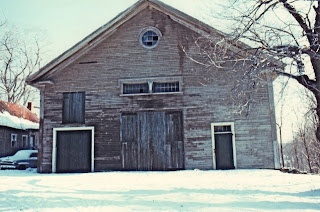 This month I have written about playing inside the barn.   See Playing in an old barn, published in The Danvers Herald on Thursday May 5, 2011.

I was happy to find these old photographs (taken in 1956 by my father, copied from slides to prints years ago, and now scanned from the prints into my computer). 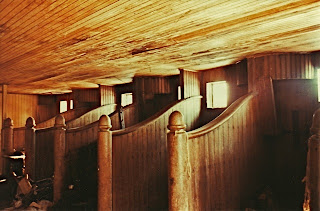 We loved to play in these fancy stalls, pretending to be horses, or more often, riding on top of the stall walls as jockeys in a race.  To climb up so high, we'd have to move some boxes or furniture into place; our legs were too short to get up there without a platform to climb on. 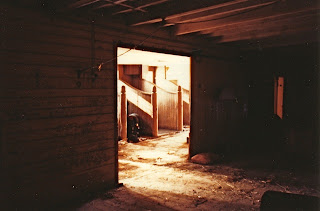 I wish we had a photo of the antique hand-pulled fire cart that was kept in this section of the main floor. 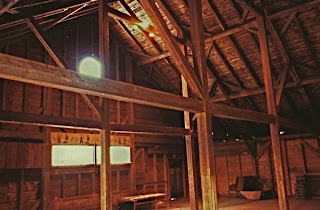 Upstairs was a wide open room or hay loft, used for games and square dances.  Note the banner of dancers posted above the horizontal window.
I believe this barn was built in 1856 as part of the Kimball estate.  In Country Estates of Old Danvers, Charles S. Tapley wrote (on page 43)
"Locust Lawn" ...
(Nichols Street)
In 1856 Edward D. Kimball of Salem, a prominent merchant and ship owner, built on the side of "Dale Hill" a fine residence.  ...
Mr. Kimball died in Paris in 1867. ... The next owner was Philip H. Wentworth of Boston, who improved the grounds by laying out more avenues through the wooded places and planting many shrubs. The huge elm tree near the entrance gates was one of the largest in the country. ...
Mr. and Mrs. Wentworth were instrumental in forming a Unitarian Church in Danvers.
In 1893, Mrs. Leopold Morse acquired this estate and she resided there during several summers.
In 1917, Dr. and Mrs. John Holyoke Nichols* bought "Locust Lawn" but they never occupied it, and the mansion was torn down several years ago.    [The mansion was torn down in 1944.]
This barn survived until the Route 95 construction project (1970) removed it and the eastern side of Dale Hill.   I hope that some of the contents and the wonderful old wood (e.g., those fancy stalls, the big beams) were salvaged and re-used somewhere.
--------
*"Uncle John," a brother to my grandfather, was the Superintendent of Tewksbury State Hospital. After retirement, he lived in the Silvester-Howe house (see p. 56 in Tapley's book) on Peabody Ave, Danvers.  He was married to Oda Howe. She was deaf and my father --a clever math-physics major-- figured out how to help amplify sounds for her, thus making his first hearing aid.  Later, my father began to make hearing aids for others, forming the Nichols & Clark, Inc., factory in my grandfather's garage on Preston St.
Posted by Sandy at 8:42 AM 2 comments: