Today, as a historic church in Marblehead, Massachusetts, celebrates its TriCentennial (1716-2016), I am thinking of my grandfather, Rev. William S. Nichols, who served as minister there 1943-46.  His portrait hangs in a room now called the Nichols room.

For more about the TriCentennial, visit  http://uumarblehead.org/tricent/

I had hoped to attend today's ceremony.  Instead, I'm at home selecting some photos of my grandfather to scan and share here.  For instance:


I love this photo of him in front of the stone chapel at Star Island (Isles of Shoals). He attended Unitarian conferences there every summer for many, many years, I'm told. Unfortunately he had died before I, as a teenager, first discovered Star. I worked several summers on that island, and people sometimes exclaimed that it was good to have a Nichols on Star again. (At first, I didn't understand the reference, not realizing that my grandfather had preceded me.)

Here is a 1952 photo of my grandparents, Granddaddy and Nana, as I knew them in their retirement years.  I remember them so clearly! We lived right next door to them in Danvers. We ran freely from our yard to theirs, and spent many hours in their home. Grandaddy built us a playhouse, and took time to read books and play games with us. A delightful grandfather! 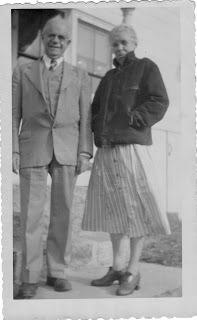 I want to share, from the 1960 "In Memoriam" booklet, some information relevant to family history and the history of the Marblehead church.  Here's an image of the booklet cover:

A Preface states that this "little brochure" was prepared and published by the Fund Raising Committee of the Unitarian Church of Marblehead "in loving memory of Doctor William Stanley Nichols, minister emeritus"  who "though already retired, gave in good measure his valued services during the years of World War II."  Four of his sermons were selected for reproduction in this booklet.

From the "Editor's Forward" (see below), we learn that my grandfather preached again in Marblehead May 18, 1958, just days before he died.
The editor, Ruth Goodwin, wrote at the end, "Thus do we quote, remember and honor our valued friend and leader who was the great great great grandson of Edward Holyoke, who was ordained the first minister of our Marblehead Unitarian Church two hundred and forty-four years ago this month." She was writing in April 1960.

Now it is 300 years since my ancestor Rev. Edward Holyoke started that church. I gather from the history posted on the website that he didn't intend to create a new church. A controversy erupted when he, as a candidate for minister of an older church, was not chosen; people who favored his candidacy broke away and established a new church for him. He served there for 21 years, until appointed to become President of Harvard College.

Growing up in Danvers, I heard relatives speak of a famous ancestor, Edward Holyoke, who was a president of Harvard long ago. I didn't then comprehend the connections to Marblehead or to ministry. (All presidents of Harvard in those early days had to be ministers...)  Nor did I see my grandfather as a minister.  He was 100% "Granddaddy" as far as I was concerned.