Today is the anniversary of my father's birth. He would have been 102 today, as he was born January 8, 1912. He lived a healthy, active life until about 80, when consequences of bone cancer began to impinge on his lifestyle. (He had to give up tennis and competitive sailboat racing at about that age, but he continued driving and did some woodworking for a few more years.) He died in the autumn of 1996, age 84.   R.I.P. Nick.   Nathan P. Nichols (1912-1996).

January 8 is also the anniversary of his parents' 1902 wedding. William Stanley Nichols (born 5-4-1872) married Nellie Eusebia Johnson (born 12-11-1874) on January 8, 1902.  They celebrated their Golden Wedding Anniversary fifty years later in Danvers, MA, and I remember a few details about the occasion.

My sister and I were dressed up in matching gold dresses and attended a ceremony and reception at a church in Danvers. 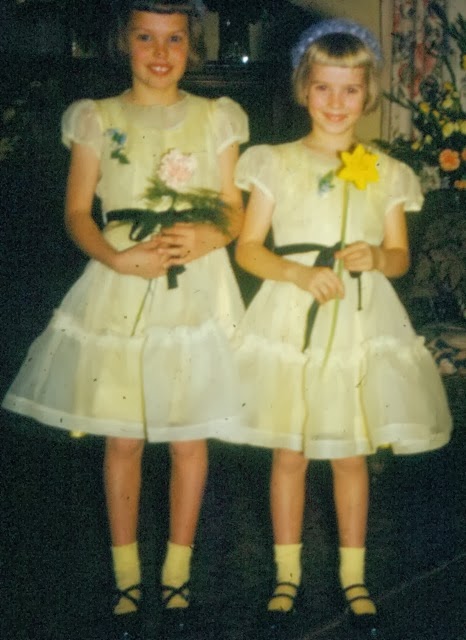 I thank my cousin Dave Brewster for scanning old Kodachrome slides taken by his father David and his uncle Dudley, and sharing these images with me. I had not seen these photos before.  I do remember, clearly, that the fancy dresses were a bit stiff and scratchy. "Skritchy" is the word that instantly comes to mind as my body shudders in remembrance. I was never very comfortable in dress-up clothes. My sister may have been more comfortable; look at this wonderful photo of Jean: 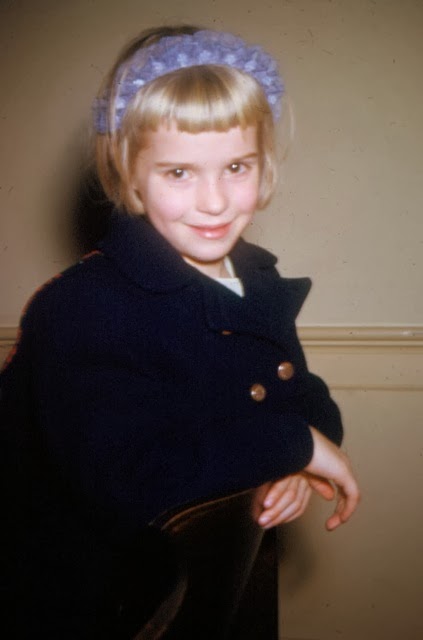 Here's a photo of my father, all dressed up for his parent's Golden Anniversary, which coincided with his 40th birthday: 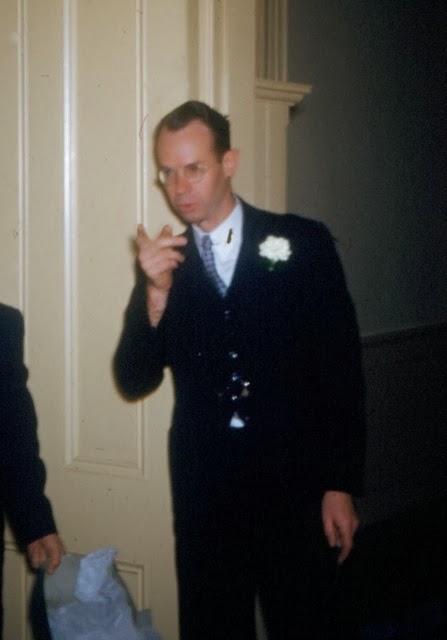 My mother, Janet Cutler Nichols, was 39, approaching her 40th birthday in a few months. Here she stands with Nana (her mother-in-law, Mrs. William S. Nichols): 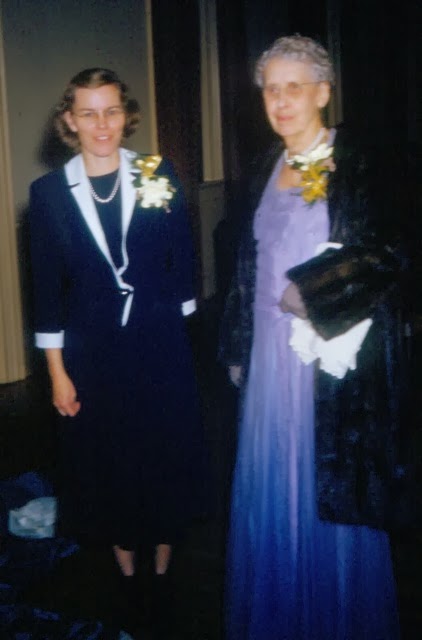 I do not remember anything about a special dinner at Pine Knoll in celebration of this Golden Anniversary, but the photographs taken by the Brewsters prove that we were there at the formal dining room table as Granddaddy --with gold crown on his head-- carved turkey. His son Edward Holyoke Nichols (my father's older brother) can be seen in the foreground. 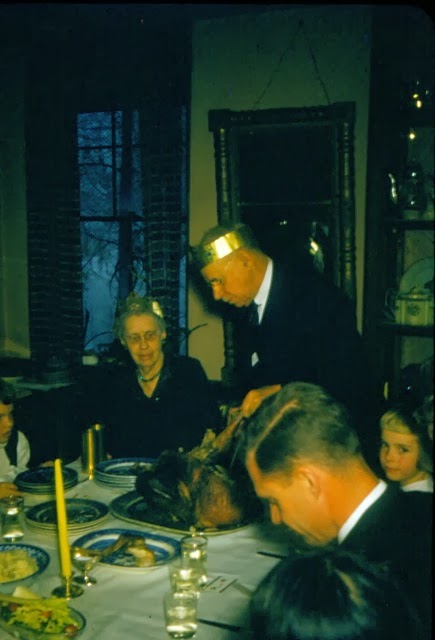 Note the golden candles on the tables in this large Pine Knoll dining room: 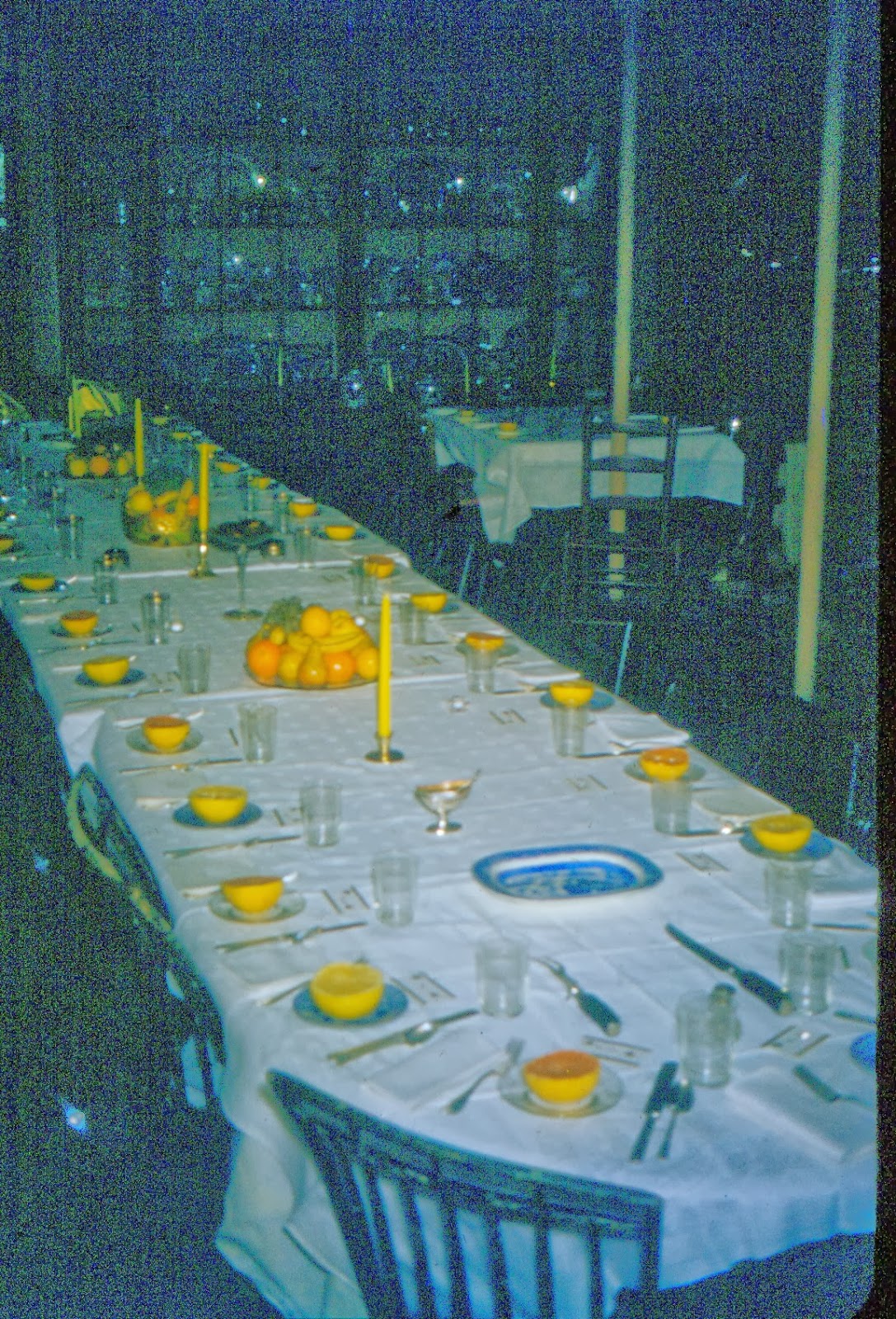 Although the picture quality is poor, I am delighted to see this documentation of the Pine Knoll dining tables decorated with golden grapefruit (a very traditional beginning of any dinner at PK) and golden candles for this anniversary dinner. Note the large China cabinet in the distance. There was a fireplace to the right (not visible in this view) and a row of south-facing windows on the left, usually filled with plants, making this basement room quite lovely.
Posted by Sandy at 8:06 AM 4 comments:

As this new year of 2014 starts, I am enjoying some old views of Danvers past. My cousin Dave Brewster has been scanning batches of his father's Kodachrome slides. Every few weeks he sends me a new link to a gallery of recent scans. Today I've been looking at images he labeled "1954-ish" and "1951-1954?" and I want to share a few here.

This is EXACTLY how I remember the ski slope at Locust Lawn! This is the view from the top, where we'd start. The rope tow is to the right. You can see the people at the bottom of the slope gathering near the rope tow to catch rides uphill. This ski slope was a happy playground for me (and many others) every winter of my childhood.

Another familiar winter scene is at Pine Knoll, the Nichols family homestead at 98 Preston Street. This home, built by my great-grandfather in 1861 and expanded in 1880, continued almost unchanged until a fire destroyed it in 1975. This view is from the north, from the newer driveway coming off Route 1.

A view to the south of Pine Knoll shows the Danvers State Hospital on the next hill:
And now a view inside Pine Knoll, at Christmas (or probably the Sunday after Christmas, as was typical) when all the cousins and their growing families returned to Pine Knoll for a holiday meal and gifts under the huge Christmas tree:
Here we are crowded into the "sitting room" (bay window facing south). My grandfather, William S. Nichols, is in the chair closest to the tree. My mother, Janet Cutler Nichols, is in the foreground at right. In between are many children focused on opening presents. I often wore my hair in braids, so I think I'm one of the girls we in the center. Cousin Emily Nichols is on the floor in front of my mother.

What a joy to see these old photographs!  I realize, with a gasp of surprise, that the date 1954 is now sixty years ago.  It doesn't seem THAT long ago, not to me, not now after spending a few hours pouring over "1954-ish" photos. The memories feel so fresh and real.

Update 1/2/14: I thanked Dave for sharing these pictures, and he has now provided more specific dates, which I've incorporated into the captions of each. The Christmas scene was likely Sunday December 28, 1953. That's 60 years ago, plus a few days!  I was then ten and a half.