This morning's earthquake in New Bedford, Massachusetts, is a reminder that earthquakes can happen in New England.

Decades ago, when I was living in earthquake-prone California, and married to a seismologist, I was very conscious of earthquakes. For a while I volunteered in our city's earthquake preparedness efforts, educating people about appropriate preparations and supplies to keep on hand, in case "the big one" came.

My father, visiting from New England, brought me his copy of The Holyoke Diaries, 1709-1858. I didn't have time then to read that book, but later became curious. I thought it would be interesting to read diary entries from family members so long ago.  In truth, those diaries entries were disappointingly short and cryptic, needing other clues to round out a story.  I was fascinated, however, to see many mentions of earthquakes.  I began to write those entries on a piece of paper...

Today, I reached up in my bookshelf, pulled down the old volume, and was pleased to see that my piece of paper was still tucked in front. 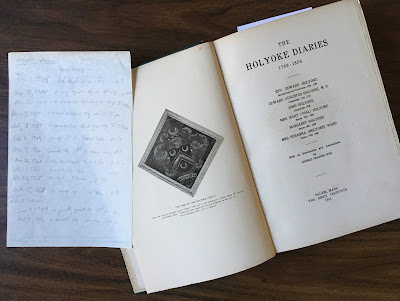 My notes include these 11 New England earthquakes noted by Rev. Edward Holyoke in his diary:

His son, Edward Augustus Holyoke, also kept a dairy and noted earthquakes on June 3, 1744 and Feb 4, 1746 ("A smal Earthquake as Some Say at 1-2").
As I typed up my notes, I consulted the Diaries, and made a few necessary corrections. This list above is more accurate than my handwritten notes shown in the photo.  I also searched on the Internet to learn more about some of these earthquakes. Here's a good overview of the history of earthquakes in Massachusetts:
http://nesec.org/massachusetts-earthquakes/
From 1668 through 2016, Massachusetts had a total of 408 felt earthquakes!  The northeast US has had over 2000 in that period.
Posted by Sandy at 1:16 PM No comments: